Book Review: Beneath the Night Tree 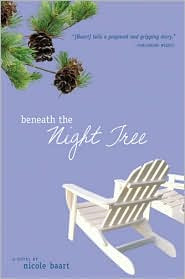 Daniel hummed in his sleep. It was an unconscious song, a midnight lullaby, as familiar to me as the sigh of my own breath. I fell asleep at night listening to the cadence of his dreams, and when I woke in the morning, his quiet melody was a prelude to birdsong.

Julia DeSmit, our heroine, is a single mom essentially raising two kids. One, Simon, is her half-brother, who's now ten. The second, Daniel, is her son. She isn't all on her own. She lives with her grandmother--the woman who raised her.

Julia DeSmit is used to feeling a bit lost, a bit of a wanderer--though that isn't really the case. She has strong family roots and unlike her mother she knows how to be responsible and loving and compassionate. Still, she has certain dreams of her own, a vague idea on how she wants her life to go. And so when one of those dreams seemingly starts to come true--a marriage proposal from Michael, her boyfriend, well, you'd think she'd be happier.

But Julia is learning that love isn't always simple, that some people are worth giving second chances. Parker, the biological father of her son, contacts her and wants to know if their one night together resulted in a child. And slowly--one or two words at a time--she catches him up on all he's been missing. But the decision to allow him into their son's life isn't automatic.

Parker may be just what Simon and Daniel need. A strong, smart father figure who gives his time and attention...he is the exact opposite of Michael in oh-so-many ways.

And that's just the beginning...

This is the third novel in the series and I enjoyed it very much. The first two are After the Leaves Fall and Summer Snow.

© Becky Laney of Operation Actually Read Bible
Posted by Becky at 8:03 AM