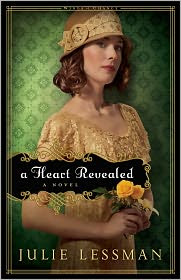 Julie Lessman could learn a thing or two from romance author Julia Quinn. And I'm not talking about adding "steamy" scenes--I think Lessman's series has *more* than enough in that department. No, I'm talking about how to do a series of family-centered romances WITHOUT it all becoming much too much. Quinn's Bridgerton series is wonderful. Each of her romances focuses on ONE sibling and only one sibling. Other siblings may show up now and then--at home, in town, at social gatherings, etc. But it is never a crammed affair. When familiar characters show up, readers can smile and say it was great to see a glimpse of them again. But it is a glimpse. A welcome glimpse for the most part, but a glimpse. There is ONE couple, one romance, one story. And I don't mean that the books are without subplots or minor characters.

Readers are never allowed for a moment to say goodbye to any character previously introduced in any of her books. If ever Lessman enters a character's mind--that mind will be revisited again and again and again and again no matter whose story it's supposed to be. So instead of this book being a romance for one couple--we enter the jumbled marriages of at least five if not six couples! Which is just TOO MUCH. And with narration from each husband and each wife of the couple--it all gets to be messy and just uncomfortable.

So it may not surprise you to learn that I was annoyed by almost every character in this one. I don't know who annoyed me most--Katie or Charity. The truth is all of the characters were tedious to me--some more than others, it's true, but there weren't really many redeeming characters that made it all worth it. This is an easy-to-yell-at book.

So the "main" characters of this one are Emma Malloy and Sean O'Connor. Emma is the married friend that Charity and Mitch brought back with them from Ireland. She is the one who owns/manages the store. And she is the saint if ever there was one. A saint in giving advice that is. If this book focuses SOLELY on how these two come together, then it probably wouldn't have annoyed me. It may not have been my favorite and best book. But it wouldn't have been a miserable read. But with the Charity drama and the Katie drama and even the Marcy drama, it was just too much.