Not-Quite-A-Review: 25 Books Every Christian Should Read 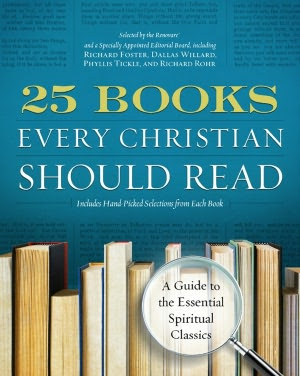 25 Books Every Christian Should Read: A Guide to The Essential Spiritual Classics. Renovare*. 2011. HarperCollins. 416 pages.

The basics: This is a book listing 25 books that "every Christian" should try to make a point to "read" in their lifetime. For an author to be chosen for inclusion in this one, I believe, one first had to be dead. Two, I believe the author had to have been nominated by someone. I'm not sure how open the nomination process was, and how widespread the appeal was to believers to nominate their favorite dead authors. But I think the book mentions that four hundred or so were initially nominated. Then the editorial board of Renovare selected twenty-five of these books as being "the best."

They did purposefully seek out older books and ancient authors for this list. They felt it only right that most of their list let several centuries stand in judgment of these books, of these authors.

"Our belief is that it is best for books to be in the canon for a while before we can clearly evaluate their worth and helpfulness. As C.S. Lewis pointed out in his introduction to St. Athanasius's On the Incarnation, old books have the advantage of having been tested by time. As Lewis wrote, "A new book is still on its trial and the amateur is not in a position to judge it. It has to be tested against the great body of Christian thought down the ages, and all its hidden implications (often unsuspected by the author himself) have to be brought to light...the only safety is to have a standard of plain, central Christianity which puts the controversies of the moment in their proper perspective. Such a standard can be acquired only from old books." (xi)


About the book: Each book has its own chapter. There is discussion about the author--who he/she was, when they lived, etc. There is a bit of an overview of the book. Included in this overview or summary is the reason why the book made the "essential" list. Then follows excerpts from the book. Sometimes the excerpts are lengthy--other times not so much. I suppose it depends on the original! And I believe some books are just more quotable than others. Finally each chapter includes a list of discussion questions. Questions that you could supposedly use for when you've read the whole book in question OR questions you could answer if you've just read the excerpts. Each chapter also highlights one of the members of the editorial board giving them each an opportunity to share a top list of books that have impacted their own lives. Sometimes these include books from the list, but, often they do not.

My thoughts: The authors themselves admit that this is a book for browsing, for skimming, that it isn't a book that demands to be read cover to cover. Even without their permission, that is how I would have gone about it.

I am skeptical about this book. I really am. True, some of that may just be I am out of my comfort zone. I LOVE theology. I just love and adore reading substantive books. But I am a choosy reader too. If I know that an author is unsound, if their beliefs, their theology, is a bit off--or a lot off, as the case may be. I won't touch it. It's not that I'm worried that I'll be contaminated by reading it. It's just that there are only so many books you can read, and if one is in doubt to if there is any truth or wisdom to be found in a book, why read it when you could be reading something better? I am not a big fan of devotional books. Or at least devotional books by people from the mystical-spiritual camp. Whether that mysticism was written over a thousand years ago, five hundred years ago, or five years a go. My skepticism only increased when I saw their list of "best contemporary authors." Note: two of the "best contemporary authors" just happened to be on the board selecting this list.

It also worries me to see who was left off the list. Where they left off the list because they were more God-centered and Bible-focused than human-focused, feeling-centered,  and prone to spiritual-fuzziness? I'm thinking of men like A.W. Pink who wrote The Sovereignty of God and Gleanings in the Godhead (which has been republished as The Nature of God--I'm currently reading this one!).  Or A.W. Tozer who wrote The Pursuit of God and The Knowledge of the Holy, not to mention the Attributes of God. (Of course, that is just a fraction of what he wrote, but still.) And R.A. Torrey. (How To Study the Bible, How To Pray, What the Bible Teaches, The Person & Work of the Holy Spirit, etc.)  And Charles Spurgeon. How could you even make an ESSENTIAL reading list and not include Charles Spurgeon?! Seriously!!!! Unless the editors are afraid of Baptists and/or sound teaching. And how about Andrew Murray? (Abide in Christ, Absolute Surrender, With Christ in the School of Prayer, The Power of the Blood of Christ, The Deeper Christian Life, etc.) And then there's John Owen (Sin & Temptation; The Mortification of Sin; The Glory of Christ: His Office and His Grace; The Death of Death in the Death of Christ; The Divine Power of the Gospel; John Owen on the Holy Spirit (four volumes). And then there's Martin Luther, Jonathan Edwards, George Whitfield, Martyn Lloyd-Jones, James Montgomery Boice, Henry Drummond, A.B. Simpson, etc. I'm sure if given enough time I could think of a dozen more. You may have your own list of obvious misses.

First, I am judging each book on its own. Just because it made their list does not mean I'm going to avoid it. Neither does it mean I'm going to seek it out. I will probably judge each book based on its excerpts, however. Which may or may not be fair. But I think it's only natural.

Second, I already know three books that I'd like to read from this list. I actually plan on reading Orthodoxy very soon.


Third, I've already read a small number of these. So I do know that some of the list at least is actually worthy of being "essential."

© Becky Laney of Operation Actually Read Bible
Posted by Becky at 10:41 AM

I've wondered about this book. Thanks for reviewing it. Do you think I need to read the book or just go straight to the "25 essentials?"

While I wouldn't necessarily recommend buying this book, it could help you weed out which books you don't want to read simply because excerpts are included from each book along with a summary. Unless you're determined to read the 25 no matter what!!! I do think it could help people find a handful of books--I just don't see any one person liking, loving, enjoying, benefitting from all twenty-five books equally. I mean some are going to have more appeal than others. And some are going to probably not be for everyone. There were a few that just left me saying WHAT?!?! Still, if it helps connects Christians with even two or three great classics, I suppose it's got some merit to it.

Fascinating. I'm a bit of a sucker for all sorts of reading lists, but mostly because I aspire to read everything (and am still young enough to foster the delusion that I can).

Seeing the list of committee members, I understand how so many of the chosen books have a mystical-spiritual emphasis. While I have gleaned some things from these more "devotional" or "emotional" writings, I (like you) prefer more solid writings that focus on accurately handling the Word.