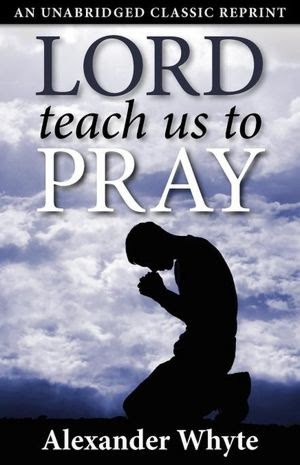 I would say that this is one of the best books on prayer I've ever read, but, since I haven't really read all that many books, that doesn't seem exactly fair. I can say that this book surprised me... in a good way. I can say that it was deep enough, relevant enough, that I read many chapters twice. I can say that I actually cared enough to take notes on at least half of the chapters. (Something I rarely do--even though it's something I probably should be doing as I read nonfiction.)

The book is a collection of sermons preached by Alexander Whyte. It is divided into three parts: part one, introductory and general; part two, some Bible types of prayers; part three, some aspects of the way of prayer.


The book is practical, relevant, devotional, and yet thought-provoking. It surprised me in more than a few places. I didn't exactly agree with every single little thing in each chapter. I found his chapter on the imagination in Christian life to be interesting--not interesting bad or interesting good, just interesting. The way he urges his listeners, his readers, to become part of the Bible, to place themselves in the stories, to fully imagine themselves in the story, on the scene, to practice reading the gospels this way. Well, it was interesting, let's say.

Now it is necessary to know, and ever to keep in mind, that prayer is the all-comprehending name that is given to every step in our return to God. True prayer, the richest and the ripest prayer, the most acceptable and the most prevailing prayer, embraces many elements: it is made up of many operations of the mind, and many motions of the heart. (185)

Earth is at its very best, and heaven is at its very highest, when men and angels magnify their office of prayer and of praise before the throne of God. (5)

Wherever in all the world there is a human heart, God also is there. And He is there in order to have that heart poured out before Him. (29)

Not only do God's saints pour out their hearts upon His heart: He pours out His heart upon their hearts. His son has come to us straight out of His Father's heart. (36)

Believe me, to pray with all your heart, and strength, that is the last, the greatest achievement of the Christian's warfare on this earth. (50)

Nothing silences, and subdues, and sanctifies our passions but prayer. (76)