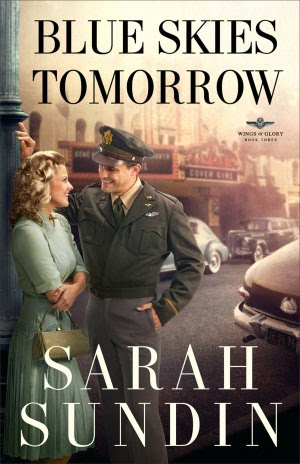 I really LOVED Sarah Sundin's A Memory Between Us, the love story between Jack Novak and Ruth Doherty. I LOVED Blue Skies Tomorrow just as much. This third novel in the Wings of Glory series focuses on Ray Novak, another pastor-pilot in the family. He has been able to spend most of the war flying out of combat as an instructor, but, times are changing and he's given a choice, an opportunity, to risk more for his country. And soon Ray has joined his brother Jack in England flying dangerous missions. But. Before Ray leaves, he has the opportunity to fall deeply in love with "grieving" widow Helen Carlisle.

Helen has become used to hiding the truth. When the novel opens, Helen is hiding the fact that she was secretly relieved when her husband died. She hides behind her work, her charity work, her good causes, etc. She hides behind her roles. The truth is, there are very few people in Helen's life she feels comfortable being completely honest and open with. But that begins to change when Helen begins to fall in love with Ray. She tells him the truth, and he believes her. But the truth-telling, well, it's a little too late or so it appears. For it gets a bit ugly and tense BEFORE his departure, and, well, correspondence helps mend a friendship, but there is so much left unsaid by both.

This one is told in alternating voices, and it is intense--very, very, very, very intense in some places. It is  incredibly compelling. If you enjoyed Memory Between Us, then you HAVE to read this one too. Readers will continue to learn about Jack and Ruth! (Also Allie and Walter).

This one has plenty of romance and plenty of drama!!!