Book Review: God on the Streets of Gotham 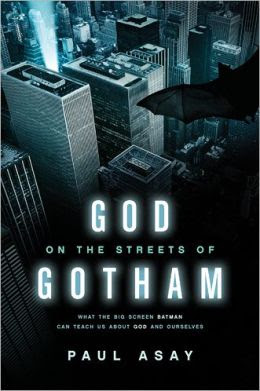 I really enjoyed reading Paul Asay's God on the Streets of Gotham. My awareness of Batman comes only from the three Christopher Nolan films, and it was interesting to read this book as a companion of sorts to watching the films. Asay's book is a wider examination than just the Nolan films: he discusses stories and shares quotes from the comic books (graphic novels), TV shows, and previous films. But his fondness for the Nolan films is evident; there are plenty of quotes and in-depth discussion of the characters (heroes and villains) as portrayed in these films.

Before beginning this book, I had my doubts. I worried that he might stretch things too far and make Batman into a Messiah figure. But after the first chapter, I stopped worrying. His argument is that Batman represents humanity at its best and worst. He's a fallen man with a dark side, with potential to fail completely. He wants to be on the good side, he wants to battle the darkness--evil--and win; but he knows his own weaknesses too well to trust himself to be THE HERO.  He knows that there has to be a man better qualified for the job of saving Gotham City.

While the book is Christian to a degree, I would say there is more direct analysis and discussion of Batman and Batman's world than there is of God. (He makes a handful of really great statements about Christianity though.) He does make some connections between the two. He does ask readers to consider contemplating Batman in light of Holy Scripture. To find deeper meaning in what we've seen on and off the screen. But. Sometimes the discussion is plenty deep on its own.


Batman's weakness isn't kryptonite, silver, or some otherworldly thing: it's his own, very human nature. And that's part of what makes him so compelling. Sure, Batman sometimes acts as a savior stand-in. But for the most part, he's not a Messiah figure. He's us. (5-6)

Batman fits right in with the rest of us. Sometimes he seems a dark loner, the next he's a veritable family man, surrounded by batwomen, batgirls, and batpets. In one graphic novel, he's a wreck, torn asunder by compulsion and neurosis. In another, he's a rock, a pillar of goodness and virtue. You're never quite sure what you're going to get with Batman--just like us. (8)

Batman's inconsistencies aren't just born of outside influence--the writers, artists, actors, and directors who have all had a hand in shaping the superhero's mythic arc over the years and the demands of the readers and viewers who consume his stories. He's a complex, often contradictory character within these various works too--at one turn the billionaire playboy, at another the dark vigilante, at still another a man unsure, seemingly puzzled by who he is and what he's become, still searching for his parents' approval. (8)

But Batman--the guy Bruce becomes when he's in costume--can't afford to express doubts or insecurity. His mask doesn't just hide his features: it helps define them. Like Batman, all of us hide behind our masks and use them to help define ourselves for others. (9)

Most of us know that if we threw ourselves open to the whole world, what would be revealed isn't always that attractive. It can be silly or ugly or off-putting, and so we only shed our masks a bit at a time. The masks we wear aren't lies. They are, in a strange way, a critical part of who we are. Batman's not unusual in wearing one: his is just a little more obvious. (9-10)

If our souls had faces--if our souls were our faces--what would we look like? (11)

Batman creators Bob Kane and Bill Finger imagined him in 1939 as a threatening, fearsome vigilante, despised by crooks and cops alike. And after so many years, he's never completely lost that sense of shadow. In Christopher Nolan's iteration of the character, that sense of darkness is as strong as ever. The films toy with the character's near schizophrenic duality--his masks upon masks--and suggest at times that the gulf between the superhero and the villains he fights isn't all that broad. (12)

We fear the darkness inside ourselves. Our anger. Our jealousy. Our desires. Our hatred. I wonder sometimes if the reason why some of us hate to be still or alone is that in the quiet of our own thoughts we find ourselves facing the darkness within--unmasked, inconsistent with the person we wish to be. We may tell ourselves that we're "good people," kind and honest and decent. And most of the time it may be true. But in the darkness, we know--we know--that it's not. We know it's a mask. And maybe that's one of the elements that attracts us to Batman (12-13)

God still loves us and cares for us even if we don't know him or love him back. Just because we shut our eyes to the light doesn't mean it leaves us or that we might not somehow see it a little, even against the walls of our eyelids.
"A man can no more diminish God's glory by refusing to worship Him than a lunatic can put out the sun by scribbling the world 'darkness' on the walls of his cell," writes C.S. Lewis in The Problem of Pain. "But God wills our good, and our good is to love Him...and to love Him we must know Him: and if we know Him, we shall in fact fall on our faces. If we do not, that only shows that what we are trying to love is not yet God--though it may be the nearest approximation to God which our thought and fantasy can attain." (15)

He's a creature of darkness in search of the light. He's no Messiah. He's not, perhaps, even a Christian. And yet when we watch him, there are unmistakable impulses within him that can have no other source than God--even if he or his authors don't fully understand that source. Who except one touched by God so fully acknowledges the darkness within himself? Who except one kissed by the Almighty rejects his own desires so thoroughly for the betterment of others? What idiot would sacrifice so much night after night without sensing a call? (17)

Batman's code is predicated on faith--not necessarily faith in the Christian God, but faith that there are such things as goodness and justice and that these things are worth fighting for, worth dying for. The world is fallen, he sees, and so is he. But at its core and at his own, there's something worth saving, something worth protecting. There is something worth redeeming. (118)

Bruce Wayne's transformation into Batman recalls many people's conversion to Christianity: a realignment of values and purpose to something higher. (165)