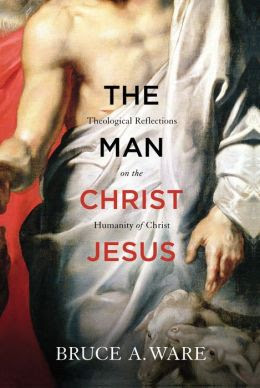 The Man Christ Jesus: Theological Reflections on the Humanity of Christ. Bruce A. Ware. 2012. Crossway. 156 pages.

I expected The Man Christ Jesus to be a difficult, challenging read. And it was. It was complex--very detailed, at times hypothetical, yet always analytical. This book tackles the humanity of Christ and makes some interesting arguments. For example, Ware argues that Jesus' obedience was perfected by his humanness. In other words, Jesus was sinless and perfectly obedient not because he was relying on his divinity to see him through, but instead Jesus was obedient in a very human way. Why was he sinless? Because he was filled with the Spirit, because through the Spirit he communed and prayed with God, because of his spiritually disciplined life of prayer, study, and worship. He used Scripture and prayer to fight temptation. Of course, that's just one of his arguments. A few seemed relatively easy to comprehend, others were more hypothetical. For example, in one chapter Ware decides to explore gender. Did the Savior have to be male, have to be "the Son" of God? Could the human-Savior-figure have been a woman, hypothetically speaking, and actually still have saved the world from its sins? Is maleness essential to the saving capabilities of God? Was Christ's gender arbitrary or planned? That chapter was so hypothetical and out there that I wish it hadn't been included at all.


It was interesting to read a book focused solely on Jesus' humanity. It was a good exploration of how Jesus' humanity was necessary then and now for our salvation. At its best, the book explained various passages of Scripture from both the Old and New Testament. It examined different arguments, as well, giving multiple points of view at times. Most of the chapters had a clear purpose and some degree of practicality to them. However, there were places in the text that were too complicated, too hypothetical, too analytical. (For example, the chapter "Living as a Man" and p. 111-113 of "Dying in Our Place.")


There are no "little obediences." Every opportunity given us by God, either to obey or to disobey, is an opportunity for that character formation and strengthening of faith that can prepare us for the greater challenges of faith God has in mind for us in the future. (69)

So while we can rightly look to Jesus with hope, seeing in him a true human who has faced and won the battle with temptation, we also must see in him a man who gave himself, with diligence and longing, to a life devoted to the Word of God, to prayer, and to reliance on the Spirit. In our longing to share in his victory over temptation, let us also share in his devotion to all that is needed to strengthen our minds and hearts and souls. (87)