Book Review: Bride in the Bargain 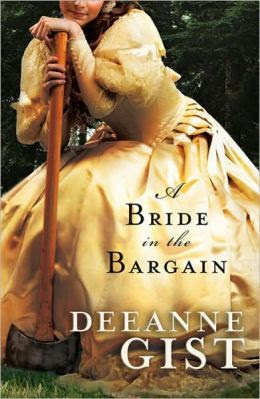 I really LOVED, LOVED, LOVED this Deanne Gist novel. Joe Denton, our hero, needs a wife to keep all of his land. He'll lose half of his land, if he can't produce either a living wife or a death certificate from his first wife. Although skeptic, he agrees to buy an Eastern mail-order bride from Asa Mercer. He pays his money and signs a contract. A year later and he's still waiting, but hopeful. When "his" bride does arrive, he's shocked to learn that she signed a very different contract. She was not told by Mercer that she would be getting a husband! No, she was promised an employer. She's expecting to cook for a lumber camp, certainly, but as an employee. Her name is Anna Ivey, and her past has been less than ideal. She blames herself--been taught to blame herself--for the death of everyone close to her: her brother, her mother, her father. Since she's unwilling to marry him but has no choice really about working for him, he has several months to woo her. The more time he spends with her, the more he realizes how much he loves her...loves her for herself...not because she's a great cook, not because their marriage would save his lumber business, but because he LOVES her and wants to spend his life with her. Can he convince her?