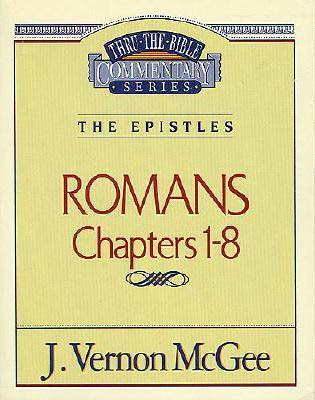 McGee goes through the first eight chapters, paragraph by paragraph, discussing important themes and concepts of the gospel as revealed in the book of Romans. Readers will get a chance to learn about: sin, wrath, justice, righteousness, justification, sanctification, imputation, propitiation, etc.

This commentary is very reader-friendly. It's a commentary meant to be read and understood by non-scholars. McGee often quoted others in his work. Perhaps feeling that if another commentator had a great definition for a key term, there was no need to try to make it better! McGee's voice is strong throughout, however, and he addresses readers in a friendly, personal way.

There is a great introduction:


The world likes to hear, friend, about the glory of mankind. It likes to have mankind rather than God exalted. Now I am convinced in my own mind that any ministry today that attempts to teach the glory of man--which does not present the total depravity of the human family and does not reveal that man is totally corrupt and is a ruined creature, any teaching that does not deal with this great truth--will not lift mankind, nor will it offer a remedy. The only remedy for man's sin is the perfect remedy that we have in Christ, that which God has provided for a lost race. This is the great message of Romans. (x, xi)


It was Godet, the Swiss commentator, who said that the Reformation was certainly the work of the Epistle to the Romans (and that of Galatians also) and that it is probable that every great spiritual renovation in the church will always be linked both in cause and in effect to a deeper knowledge of this book. It was Martin Luther who wrote that the Epistle to the Romans is "the true masterpiece of the New Testament and the very purest Gospel, which is well-worthy and deserving that a Christian man should not only learn it by heart, word for word, but also that he should daily deal with it as the daily bread of men's souls. It can never be too much or too well read or studied; and the more it is handled, the more precious it becomes, and the better it tastes." (xi)

After outlining the entire book, McGee then devotes a chapter for each chapter of Romans one through eight.

The sinner appropriates Christ by faith for both his salvation and his sanctification. (104)


© Becky Laney of Operation Actually Read Bible
Posted by Becky at 11:44 AM