Book Review: John Calvin and His Passion for the Majesty of God 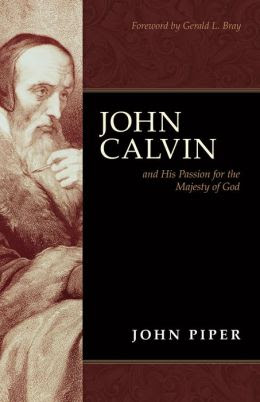 This book is a short biography of John Calvin written by John Piper. It isn't strictly a book about John Calvin or Calvin's theology. While some of the book deals specifically with Calvin and the times in which he lived, the book also presents a great argument for the importance of expository preaching. This book has a great deal to say about the Bible!

There are seven chapters and an appendix: "God Is Who He Is," "A Passion for the Glory of God in Christ," "Mastered by the Majesty and Word of God," "Ministry Made by the Majesty of the Word," "Marriage to Idelette," "Constant Trials," and "Constancy in Expounding the Word of God."


John Calvin would approve that we begin with God rather than with him. Nothing mattered more to Calvin than the supremacy of God over all things. Focus your attention, then, on God's self-identification in Exodus 3:14-15. Here we will see the sun in the solar system of John Calvin's thought and life. (11)


Whether we want him to be there or not, he is there. We do not negotiate what we want for reality. God defines reality. When we come into existence, we stand before a God who made us and owns us. We have absolutely no choice in this matter. We do not choose to be. And when we are, we do not choose that God be. No ranting and raving, no sophisticated doubt or skepticism, has any effect on the existence of God. He simply and absolutely is. (12-13)


Even precious truth about eternal life can be so skewed as to displace God as the center and goal. (16)

There is the key for Calvin: the witness of God to Scripture is the immediate, unassailable, life-giving revelation to our minds of the majesty of God that is manifest in the Scriptures themselves. The majesty of God is the ground of our confidence in his Word. (25)

I take that to mean that God witnesses to us of his reality and the reality of his Son and his Word by giving us life from the dead so that we come alive. His witness is the gift of spiritual life. His witness is that we come alive to his majesty and we see him for he is in his Word. In that instant, we do not reason from premises to conclusions--we see that we are awake, and there is not even a prior human judgment about it to lean on. (26)

Calvin had seen the majesty of God in the Scriptures. This persuaded him that the Scriptures were the very Word of God. He said, "We owe to the Scripture the same reverence we owe to God, because it has proceeded from Him alone, and has nothing of man mixed with it." (45)

Calvin reckoned that the continuous exposition of books of the Bible was the best way to overcome "the fearful abandonment of God's Word." (48)

Calvin had a horror of those who preached their own ideas in the pulpit. He said, "When we enter the pulpit, it is not so that we may bring our own dreams and fancies with us." He believed that by expounding the Scriptures as a whole, he would be forced to deal with all that God wanted to say, not just what he might want to say. (49)

God's Word is mainly about the majesty of God and the glory of God. That is the main issue in ministry. And even though the glory and majesty of God in his Word can be known in the still, small voice of whispered counsel by the bedside of a dying saint, there is something in it that cries out for expository exultation. This is why preaching will never die. And radical, pervasive God-centeredness will always create a hunger for preaching in God's people. (50)