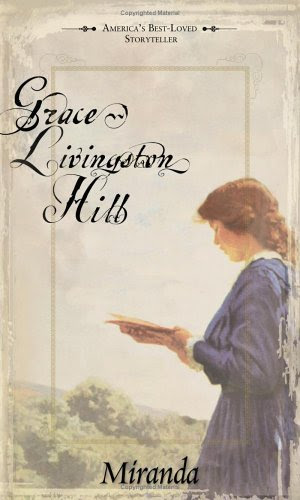 While I certainly enjoyed Marcia Schuyler and Phoebe Deane, I really LOVED Miranda. Perhaps because Miranda has had a role to play--indeed most significant roles to play in both previous books giving the reader plenty of time to get to know her or love her. Perhaps just because this one avoids some of the "weaknesses" of the earlier novels. What I enjoyed most about Miranda was the LACK of a scoundrel or villain. Miranda's love story is just as unique as she is, in a way. It isn't presented traditionally either. The romance first starts with a proposal--five proposals in fact--ending early on with the man marrying another young woman in place of Miranda. He's a widower with a LARGE family. One of the youngest is a young boy named Nathan. After the wedding, the two become friendly--very friendly. Then readers are rushed to the past. Readers see a few significant incidences in Miranda's life, for example, we see her at school where she's madly in love with the school's bad boy or troublemaker. We see her "save" him, in a way--in a way only Miranda can accomplish! We later see this "bad boy" in trouble again, this time with the law. It is in Miranda's power to free him--she has access to the smokehouse where he's being locked up temporarily. But is it in his best interest and her own that she do so? Right or wrong, Miranda's decision is made long before readers get a chance to know her in previous books. (I wasn't sure how these past revelations fit in with Marcia Schuyler. If both events occurred before Miranda befriends Marcia, but, I imagine at least one of them was before.) The idea of falling in love with an eligible young man is unthinkable to Miranda, she's content to be a part of Marcia and David's household, to look after their daughter, Rose, to help keep house. The "present" of this novel (minus the flashbacks) occur in the late 1830s to early 1840s. Miranda is in her mid-to-late twenties and is definitely considered a plain old maid. Only readers know that Miranda's heart belongs to a "bad boy" from oh-so-long ago. She may not know where he is--if he is even in the United States--but she thinks of him sometimes.
Readers learn before Miranda just what he has been doing. He's "found" in Oregon territory; he's a trapper who has just made friends with a missionary named Dr. Whitman....and so the story truly begins to unfold.

Miranda is RICH in historical detail. I loved that about this series, but especially in Marcia Schuyler and Miranda. Is it necessary to have read Phoebe Deane before reading this one? Not really. Phoebe is not a part of this story, this community. Is it necessary to have read Marcia Schuyler before reading this one? Perhaps. But not extremely important. It would just give readers a better understanding of David and Marcia's family.