Book Review: The Disappearance of God 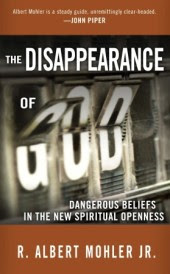 From the preface, Has God disappeared? The tragic reality is that we are living in an age that is marked by so much spiritual and theological confusion that the God of the Bible has largely disappeared from view--replaced by less imposing deities that are more amenable to the modern mind.... The situation is complicated further by the embrace of an "openness" that is not open to authentic biblical Christianity. Tolerance becomes a code word for avoiding truth, and openness means never having to make a judgment about truth at all. A rescue from this predicament would appear more hopeful but for the fact that the church has, in large part, apparently joined the revolution...far too many Christian churches flirt with doctrinal disaster. (xiii-xiv)

I first read this nonfiction book in 2009. This book covers a lot of different subjects or topics. It is not as if each and every chapter stands alone, often two or three chapters go together. But the book could almost be read in any order and used as a resource.


The opening chapters are wonderful in establishing the premise of the book: how important, how essential it is for believers to a) KNOW the essentials of the faith, know what they believe, to be grounded in the Word of God b) KNOW the difference between what is truly most important and what is of lesser importance in theology. In other words, it's important for believers to be wise and discerning, something that can't be managed without a good, solid foundation in the Word of God. Before you can hope to discern truth from lies, false teachers from sound teachers, you have to know what the Bible says, you have to know the truth--deeply, personally. But it's also crucial for those who would be discerning that they can distinguish between what matters are absolutely critical or essential--foundational--to the faith, matters that are worthy of taking a non-compromising stand on, worth defending and which matters are of lesser importance. It is important not to waste your "fight" and cause confusion and bitterness. Believers are not called to compromise on the essentials, and we're called to be as unified as possible with fellow believers. In some areas, we're called to be bold, to speak the truth, to take a stand, and in other areas we're called to keep the peace and allow for differences.

Mohler then tackles some issues facing the church today.

I would definitely recommend this one.


God's truth is to be defended at every point and in every detail, but responsible Christians must determine which issues deserve first-rank attention in a time of theological crisis. (2)

We are charged to embrace and to teach the comprehensive truthfulness of the Christian faith as revealed in the Holy Scriptures. There are no insignificant doctrines revealed in the Bible, but there is an essential foundation of truth that undergirds the entire system of biblical truth. (7)

As Rabbi Jacob Neusner once lamented: "A country without a sense of shame or of sin does not have a sense of right or wrong, just what is useful or what you can get away with or not get away with." (20)
The disappearance of sin from our moral vocabulary is one of the hallmarks of the modern age--and of postmodern morality. These days, most people think themselves to be imperfect, leaving room for improvement--but they do not think of themselves as sinners in need of forgiveness and redemption. (25)

Genuine Christianity cannot escape dealing with sin. The gospel will not allow any evasion of sin as the universal human condition of revolt against the Creator, the God of absolute holiness and absolute love. (27)

The word is seldom uttered in many churches--even some who would describe themselves as evangelical. This is an abdication of the gospel. Where sin is not faced as sin, grace cannot be grace. What need have men and women of atonement when they are told that their deepest problem is something less than what the Bible explicitly teaches? Weak teaching on sin leads to cheap grace, and neither leads to the gospel. (28)

How is it that so many evangelicals--including some of the most respected leaders in the movement--now reject the traditional doctrine of hell in favor of annihilationism or some other option? The answer must surely come down to the challenge of theodicy--the challenge to defend God's goodness against modern indictments.
Modern secularism demands that anyone who would speak for God must now defend Him. The challenge of theodicy is primarily to defend God against the problem of evil. The societies that gave to the decades of megadeath, the Holocaust, the abortion explosion, and institutionalized terror will now demand that God answer their questions and redefine Himself according to their dictates. (35)

The first issue is a changed view of God. The biblical vision of God has been rejected by the culture as too restrictive of human freedom and offensive to human sensibilities. God's love has been redefined so that it is no longer holy. God's sovereignty has been reconceived so that human autonomy is undisturbed. In recent years even God's omniscience has been redefined to mean that God perfectly knows all that He can perfectly know, but He cannot possibly know a future based on free human decisions. Evangelical revisionists promote an understanding of divine love that is never coercive and would disallow any thought that God would send impenitent sinners to eternal punishment in the fires of hell. They are seeking to rescue God from the bad reputation He picked up by associating with theologians who for centuries taught the traditional doctrine. God is just not like that, they reassure. He would never sentence anyone--however guilty--to eternal torment and anguish. (35-36)


© Becky Laney of Operation Actually Read Bible
Posted by Becky at 10:02 AM