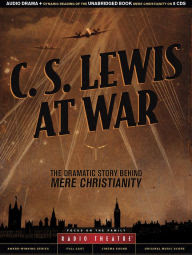 What is it about? It opens with a radio broadcast being interrupted to announce that war has been declared against Nazi Germany. A few minutes later, listeners hear C.S. Lewis' lecture--or guest lecture--being interrupted to deliver the same news to students. So, essentially it is focused on World War II, and, the effect of the war on the British home front. Particular attention is paid to the BBC and to C.S. Lewis. It is a behind-the-scenes glimpse of the creating of Mere Christianity and The Screwtape Letters.

Further thoughts: Though I am not typically a fan of audio books, I have a harder time listening than reading, I thought the format of this one worked well. Why? Because the heart of the story is about RADIO BROADCASTS, so it makes perfect sense to LISTEN to the story in such a dramatic, polished way.