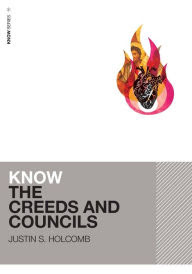 I would definitely recommend Justin Holcomb's Know the Creeds and Councils. This isn't the first book I've read on the subject of church history, though I wish it had been! The book I read was thick, scholarly, and in my opinion, poorly organized. This one, on the other hand, was reader-friendly, well-organized, and written primarily to be UNDERSTOOD. In the introduction, he defines the four key terms used throughout the book: creeds, confessions, catechisms, and councils. He shares his purpose for writing the book: "to provide an accessible overview of the main creeds, confessions, catechisms, and councils of Christian history. It is an introduction to some of the most important theological declarations in the Christian tradition." He shares his method: "For each creed, confession, catechism, or council, I present historical background, a short summary of the content, and thoughts on contemporary relevance. At the end of each chapter are discussion questions and recommended reading for further study." The chapters are arranged chronologically, of course.

The definitions he gives are straight forward. For example, this is how he defines the term catechism: "A catechism is a book or document giving a brief summary of the basic principles of Christianity in Q&A form. Catechisms represent the practical, “on-the-ground” application of the main teaching agreed upon at church councils and expressed through creeds and confessions."

What I appreciate is Holcomb's assessment of each. He is fair, kind, respectful, of course, and the goal is never to persuade readers to believe exactly what he believes. But he provides a solid grounding for understanding Christian doctrines. One feels that he is a true (tour) guide: he knows the path and can point out the sights along the way. He can tell you where to watch your step, where to be careful. And along the way, he can share interesting facts.

Let's play Did You Know!

Did you know...."the Apostles’ Creed has expressed the essentials of Christianity in a way that Christians of all stripes can rally around."

Did you know...."the Nicene Creed was the first creed to obtain universal authority in the church, and it improved the language of the Apostles’ Creed by including more specific statements about the divinity of Christ and the Holy Spirit."

Did you know that...."Without the truths that were expressed in the Definition of Chalcedon, it is difficult to see how our salvation was accomplished. If Christ were not fully human, or if he were not fully divine, he would not be able to serve as our mediator — as the God-man. He would be either just another man or God himself."

Did you know that...."According to Martin Luther, the Athanasian Creed was “the most important and glorious composition since the days of the apostles.”

Did you know that...."The Council of Trent aimed to remedy the problems within the Catholic Church that had contributed to the Reformers’ cries of protest. The reforms included correcting abuses of power by the clergy, clarifying the balance of authority between Scripture and church tradition, and issuing official statements on justification, the sacraments, and purgatory. All in all, the Council of Trent did not repair the fractures between the Catholics and Protestants, but it did succeed in clarifying the Catholic Church’s position on significant areas of doctrine and bringing moderate reform to the abuses of power against which the Reformers had revolted."

Did you know that..."Even 450 years after it was written, the Heidelberg Catechism remains an official statement of theology for most of the branches of the Reformed church worldwide today."

Did you know that...."the Thirty-nine Articles created a fertile ground for theological exploration while simultaneously identifying the potential pitfalls of heresy."

Did you know that..."The Westminster Confession of Faith (WCF) is a Reformed confession produced by that Westminster Assembly in London. Intended to set the doctrinal standards for the Church of England, it became a powerful force in the Church of Scotland and has influenced Presbyterian churches all over the world. Centuries later, numerous churches and denominations worldwide look to the Westminster Confession as their standard of doctrine, subordinate, of course, to Scripture"

While I would not want to be quizzed on what I remember from the book several weeks later, I do feel it was a helpful read overall.
© Becky Laney of Operation Actually Read Bible
Posted by Becky at 2:43 PM