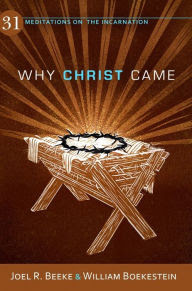 If someone asked YOU "Why did Christ come?" what would YOU say? Could you share the why of the gospel message?

Why Christ Came is a wonderful, little book that I would strongly encourage every believer to read and perhaps even read often. It is a gem of a book that from start to finish focuses on the WHY. It isn't the only Christian living book that focuses on the why, of course. But it is concise and so Christ-centered that it may just be the BEST book you'll ever read about the why. (I'll amend that to read the best book outside the Bible itself.)

You might be tempted that this is a seasonal book. That it is a devotional book for the month of December, perhaps, or maybe March or April--whatever month Easter happens to be. But, in my personal opinion, that would be silly--foolish--to think that the incarnation was relevant only once or twice a year. Every single day is a day to CELEBRATE the fact that Jesus came to dwell among us.

I think that believers should preach the gospel to themselves daily. Believers need to dine daily--find refreshment--from the gospel. The gospel may seem basic and simple at first, but, there is depth, substance, a certain RICHNESS to it that leaves one speechless.

Each chapter states one reason why Christ came. That one reason may be drawn from one text of Scripture--or several verses. Each chapter directs readers back to the heart of the gospel.

I will not be sharing all thirty-one reasons. But I thought I would share a few reasons with you.


Jesus met that challenge; He did the will of God in all things. He performed every duty of the law (Matt. 5:17) and resisted all temptation to transgress it. At the end of His earthly life He could say, “I have finished the work which thou gavest me to do” (John 17:4). Not one of the Father’s expectations went unfulfilled in Christ. When Christ said, “It is finished,” He meant it (John 19:30). By His obedience to God’s will, even in the things that He suffered, He secured salvation for us. As our high priest, Christ teaches us that we have no other way of dealing with our moral failure and its penalty than to come to God and say, “Nothing in my hand I bring, / Simply to thy cross I cling.”

In Christ’s first coming, He implemented a rescue plan conceived in the mind of God before the foundation of the world. He did not come to promote holiday cheer, boost end-of-year sales, or serve as the central figure in a nativity scene. He came to save sinners. To save sinners, Christ had to put away what makes people sinners—namely, sin. Christ put away the sins of many first by carrying them to the cross, and then to the grave (Heb. 9:28). The sins of God’s people were crucified and buried in Christ (Rom. 6:4–5). So fully has Christ purged the believer’s sins that Hebrews 9:28 adds, “Unto them that look for him shall he appear the second time without sin unto salvation.” How staggering is the thought that we can eagerly anticipate the return of the Savior who was wounded for our transgressions! Redeemed sinners can be so confident that Christ has put away their sin that they can look forward to His return as a day of salvation.

From chapter five: TO BEAR WITNESS TO THE TRUTH (John 18:37)

In cultures and thought systems that reject the very idea of absolute truth rooted in Christ, speaking the truth is not necessarily a virtue, and lying is not necessarily a fault. When we think about Christ’s coming, we should consider the truth to which Jesus’ birth testifies. He came to testify that all men pervert the truth and justice of God. As Paul says in Romans 3:4, “Let God be true, but every man a liar.” The truth of God in Christ shines light upon our hearts and exposes the lies we use to justify a life at odds with God. But He also came to address this problem. Christ bears witness to “the word of truth, the gospel of your salvation” (Eph. 1:13). When we look to Christ by faith, we are overwhelmed by the radical truthfulness of God and the radical deception that is found in each one of us (Deut. 32:4; Jer. 17:9). But we also begin to hear Christ teach the way of God in truth (Matt. 22:16). As we walk in this way, we will find great freedom.

From chapter five: TO REVEAL GOD'S LOVE FOR SINNERS (John 3:16)


John 3:16 makes the surprising claim that God loves the world. God, the maker of heaven and earth, is self-sufficient and needs nothing outside of Himself. He is the Holy One whose pure eyes cannot look upon sin (Hab. 1:13). His desires are always upright, His love completely pure, and His affection never misplaced. How can such a God love the broken, sin-marred world?

Christ uses the word world to show the mystery and fullness of God’s love, which is not limited to people of one race or to those who lived at a particular time or place. Note that Jesus does not speak of universal atonement here. He says He died for those whom God chose to believe in Him (John 6:37) and in whom He works saving faith as a gift of grace (Eph. 2:8).

God’s love for His people can only be understood in relation to His love for His Son. The only begotten Son is the eternal object of the Father’s affection. Two times during Christ’s public ministry, the Father shattered heaven’s silence to affirm His love for His Son (Matt. 3:17; 17:5). It is impossible to imagine the depth of love that binds the Father and the Son. Our love for our children is diminished by both our sin and theirs. Even the love of Jesus’ earthly family and friends for Him was limited (Mark 3:21; John 7:5). But the love between God the Father and God the Son is perfect, personal, intimate, deep, and committed. It is love without limits, which is not subject to change or decay.

Christ came to earth to show us the riches of God’s love. This is the good news of Christ’s advent. In Jesus Christ, God loves His believing children with this same incomprehensible, infinite, and unchangeable love. The Father sent His Son to earth where He would die on the cross to deliver us from sin. Is it possible that He will now withhold from us any good thing (Rom. 8:32)? No, for Christ’s incarnation confirms that nothing “shall be able to separate us from the love of God, which is in Christ Jesus our Lord” (Rom. 8:39).

I enjoyed this one last December, but I very much agree that it doesn't need to be kept for the Christmas season and that we should think on the Incarnation more than once a year.