Book Review: For the Glory 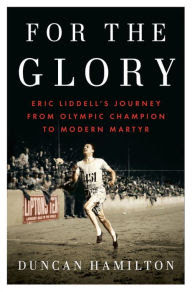 When I saw For the Glory: Eric Liddell's Journey From Olympic Champion to Modern Martyr appear on the 'new books' list at my local library, I knew I would want to read it. I also knew that I would need to rewatch Chariots of Fire. Though I had vague memories of watching it in sixth grade--the other movie we were shown during school time was The Hiding Place--I really didn't know enough about Eric Liddell to commit to reading an almost four-hundred page book. I made time for both book and movie this past month. I'm glad I made the time. I liked the movie very much. But I loved, loved, loved the book.

Do you have to love, love, love sports to love this one? I'd say no. Honestly, though I typically watch track events during the Olympics, it's the one-and-only time I watch track. And track isn't the real reason I tune into the Olympics. I find the Olympics irresistible. Thousands of human interest stories just waiting to unfold. But. I've gotten distracted.

Do you have to have a love of history, a love of World War II in order to love this one? This one is trickier. I can't imagine not loving history and not being fascinated by World War II. The first third of the book covers Eric Liddell's 'running' career in the early 1920s. The second third covers his time as a missionary in China in the 1930s--both as a single man and as a husband and father. The last third of the book covers his time in occupied China as a prisoner in a "work camp" during World War II.
The last third of the book was easily the best. That's not to say that the first two-thirds was lacking. It wasn't. It really wasn't. But I found the last hundred or so pages so compelling, so emotional that I could NOT, would NOT put it down.

Do you have to love God, do you have to be a Christian, to appreciate this one? I would hope not. Eric Liddell's story is worth knowing, trust me. And the more people read this one, the better, in my opinion. That being said. I am a Christian. I found the sections on his missionary life FASCINATING. Particularly his time in the work camp, his time as a prisoner. How he lived--how he died--I'm almost--almost--left without words. It was quite moving. Heart-breaking, inspiring, wonderful and tragic all at the same time.

All I can say is that the movie-makers focused on the wrong stuff. A movie focusing on his life as a missionary would be well-worth watching. That's a movie I would dearly love to see though it would require a lot of tissues!!!!!!

© Becky Laney of Operation Actually Read Bible
Posted by Becky at 9:53 AM