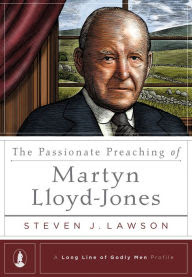 The Passionate Preaching of Martyn Lloyd-Jones is one of the biographies in Reformation Trust's Long Line of Godly Men series. This title is written by one of my favorite authors/speakers Steven J. Lawson. (I thought I loved him before watching the sermon series The Doctrines of Grace in the Gospel of John. Now I love, love, LOVE him.) I am also very fond of Martyn Lloyd-Jones. This is not my first title to read in the series, and, it won't be my last. I'd love to read as many as I can actually! I think it's a great way to approach biographies.

In the first chapter, readers get a relatively brief introduction to his life--birth through death. This is roughly twenty-five pages! I'd say it was a just-right amount of biographical context.

In the second chapter, the focus shifts to the ministry. The argument is that ministers should be sovereignly called. The chapter includes six distinguishing marks of divine calling. 1) Inner compulsion 2) Outside influence 3) Loving concern for others 4) Overwhelming constraint 5) Sobering humility 6) Corporate Confirmation. Lloyd-Jones did not believe that theological training in a seminary was necessary or always beneficial. He also did not believe in lay preaching. All are called to be witnesses but not all called to PREACH. Preaching is not the same as teaching or witnessing.

In the third chapter, the focus shifts to the Bible--the Word of God--and the role the Bible should have in the life of the minister and the life of the church. Many chapters within this book focus on preaching from the Bible, expository preaching from the Bible, going verse-by-verse-by-verse through whole books of the Bible. But this chapter focuses more generally on the authority and power of the Bible. The Bible is divine, the very word of God. I loved, loved, loved this chapter.

We can be perfectly certain that the Church has lost her authority and power from the moment she ceased to firmly believe in the authority of the Word of God. ~ Lloyd-Jones

From the moment that the idea began to gain currency that the Bible was the history of the quest of mankind for God, rather than God's revelation of Himself and the only way of salvation to mankind, the Church began to decline and to wane in her influence and in her power. From the time the Church threw overboard the great evangelical doctrines, and substituted for them a belief in the moral and spiritual evolution of mankind, and began to preach a social gospel rather than a personal salvation--from that moment church attendance really became a mere matter of form, or a merely pleasant way of gratifying one's appetite for ceremony, ritual, oratory, and music. ~ Lloyd-Jones

The purpose of studying the Scripture is to arrive at its doctrine. ~ Lloyd-Jones

I believe the paramount and most urgent duty at the moment is not to defend the Bible, not to argue about the Bible--I believe we are called upon at the present moment to declare the Bible: to announce the eternal truths contained in the Bible. ~ Lloyd-Jones

The fourth chapter begins by making a distinction between teaching and preaching. How did Martyn Lloyd-Jones define the terms "preacher" and "preaching"?

The first thing, obviously, is that he is a speaker. He is not primarily a writer of books, he is not an essayist or a literary man; the preacher is primarily a speaker. So if the candidate has not got the gift of speech, whatever else he may have, he is not going to make a preacher. He may be a great theologian, he can be an excellent man at giving private advice and counseling, and many other things, but by basic definition, if a man has not got the gift of speech he cannot be a preacher. ~ Lloyd-Jones

The business of the preacher is to bring the Bible alive to them, to show them what is in it to thrill them as they hear it from him. ~ Lloyd-Jones

The fifth chapter makes distinctions between lectures and sermons. This chapter would be completely practical for ministers. It is focused on sermon preparations, etc. For example, the necessity to have at least a sermon outline, if not a full draft of what one will say.

The sixth chapter is about how all sermons should be divinely-focused and seek at all times to unveil God. This may just be the best chapter in the book. Maybe. They're all so good though!

The goal of preaching is to plant within people the knowledge of God, a sense of wonder for His divine holiness, and an overwhelming realization of His ardent love for sinners. ~ Lawson

The Word of God is, first and foremost, a presentation of the awesome majesty of God. ~ Lawson

The preaching of God must begin with expounding the absolute holiness of God. Lloyd-Jones said every other area of truth must be viewed in light of this divine attribute. ~ Lawson

You will never have a knowledge of sin unless you have a true conception of the holiness of God. ~ Lloyd-Jones

It is the holiness of God that demands the cross, so without starting with holiness there is no meaning in the cross. It is not surprising that the cross has been discounted by modern theologians; it is because they have started with the love of God without His holiness. It is because they have forgotten the life of God, His holy life, that everything in Him is holy; with God love and forgiveness are not things of weakness or compromise. He can only forgive sin as He has dealt with it in His own holy manner, and that is what He did upon the cross. ~ Lloyd-Jones

The seventh chapter focuses on doctrine and theology. Preachers should have a good and solid grasp of systematic theology and biblical theology.

Preaching must always be theological, always based on a theological foundation...there is no type of preaching that should be non-theological. ~ Lloyd-Jones

Each doctrine in Scripture is inseparably joined to every other doctrine. Preaching must be aimed at teaching what he called "doctrinal certainties" that unify the entire Bible in one cohesive body of truth. ~ Lawson

It is our business to face the Scriptures. One advantage in preaching through a book of the Bible, as we are proposing to do, is that it compels us to face every single statement, come what may, and stand before it, and look at it, and allow it to speak to us. ~ Lloyd-Jones

The eighth chapter focuses on Lloyd-Jones being Reformed. This chapter specifically focuses on tracing the doctrines of grace through his works.

Instead of labeling the doctrine he was preaching, Lloyd-Jones opted to simply explain the text of Scripture. ~ Lawson

The ninth chapter is the final chapter. It focuses on the Holy Spirit and the role of the Spirit both in the minister and in the church.

The Holy Spirit must be active in true preaching, active not only in owning the truth as it is heard, but active in anointing the preacher himself. ~ Lloyd-Jones

Lloyd-Jones insisted that without the power of the Spirit, a man in the pulpit is merely reading his notes and repeating words. ~ Lawson

© Becky Laney of Operation Actually Read Bible
Posted by Becky at 9:41 AM