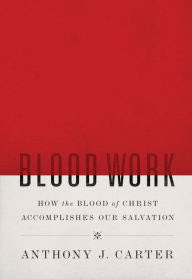 I thought Blood Work was a great, quick read. I thought it was great because the focus was on Jesus Christ and what he has done for us. It very much focuses on our union with Christ and ultimate salvation by the blood of Christ. The first chapter introduces the subject focusing on the gospel message as revealed in Scripture. Each additional chapter focuses on an aspect of salvation. For example, justification, sanctification, propitiation, redemption, election, etc. Each chapter is adequately--more than adequately--supported by Scripture references. I also thought it was great because it is a thought-provoking read.

I thought it was also a quick, reader-friendly read. I liked the length of the chapters. It felt very readable, very manageable to me. It was concise but not shallow. It was not so deep that there were a hundred footnotes to cite all the scholars quoted. It felt practical to me as well. One would hope that all books about the atonement would feel equally practical and relevant. But that isn't always the case. I think this one gives readers enough to think about so that it encourages devotional reflection. It is not a textbook on the atonement. And it never promises to be absolutely thorough.

We are His and He is ours. His blood sealed our union with Him.

If you are in Christ, you live because of the blood of the Lamb of God. In the blood of Christ, we have what we lost in Adam, namely, life. The shedding of our Savior’s blood was significant not for the blood itself but for what it represents. It represents the perfect, sinless life of Christ poured out unto death for us (Isa. 53:12).

We receive a life transfusion—His death for our death, His life for our life. It all is according to His precious blood, which satisfies God’s righteous requirements for life and justice. Blood in the Old Testament spoke and satisfied. But it did not speak or satisfy well enough. It took the coming of the spotless Lamb of God, whose eternal blood is called precious, priceless, and powerful, to speak and satisfy finally.

Being the possession of Christ is the hope of the Christian. To be a Christian is to belong to Him. To belong to Christ is the foundation for comfort and security in this life and in the life to come. This is the point poignantly made by Question One, Lord’s Day One, of the Heidelberg Catechism. The catechism asks, “What is your only comfort in life and in death?” The answer rings with the truth of the purchasing power of the blood of Christ and our security in His possession: That I am not my own, but belong—body and soul, in life and in death—to my faithful Savior Jesus Christ. He has fully paid for all my sins with his precious blood, and has set me free from the tyranny of the devil. He also watches over me in such a way that not a hair can fall from my head without the will of my father in heaven: in fact, all things must work together for my salvation. Because I belong to him, Christ, by his Holy Spirit, assures me of eternal life and makes me wholeheartedly willing and ready from now on to live for him.

Sin is rebellion against God’s will, the manifestation of humanity’s revolt against its Creator. It has been said that sin is not just breaking the rules, it is making one’s own rules. Though God is patient and kind, He will not leave the guilty unpunished (Ex. 34:7). Those who are guilty of sinning need God’s wrath against their sins to be removed and His justice to be satisfied. Jesus, in giving His life as a sacrifice, satisfied the righteous and just wrath of God against our sin, thus providing for us reconciliation and peace with God.

The question is often raised, “For whom did Christ die?” In Romans 5:6–9, the Bible tells us that Christ died for those who are “weak,” “ungodly,” and “sinners.” “Weak” speaks to our inability to save ourselves. It indicates that we are without strength and power. It brings to mind someone who is incurably sick. The illness has debilitated him to such a degree that all power of recovery has left him and death is inevitable. He is unable to save himself from this pending end. Jesus declared that these are the ones He came to save (Mark 2:17). As weak spiritual invalids, we not only could not save ourselves, we had no idea that a cure was possible. “Ungodly” speaks to our activity in opposition to the ways of God. It is the designation of sinners as impious, refusing to worship the God who created them while living and loving contrary to His holy character and commands. It is reflective of what the Bible means when, speaking collectively of humanity, it says: “None is righteous, no, not one; no one understands; no one seeks for God. All have turned aside; together they have become worthless; no one does good, not even one.’…‘There is no fear of God before their eyes’” (Rom. 3:10–12, 18). Thess verses remind us that the weak and the ungodly are such because they are sinners—transgressors of God’s law. “Sinners” is the summation of what we are in relation to God’s Word and will. The Westminster Shorter Catechism defines sin as “any lack of conformity unto, or transgression of, the law of God.”25 Sin is manifested when we do what God commands us not to do and when we fail to do what God has commanded us to do.

As the Bible plainly states, “Christ died for the ungodly” (Rom. 5:6). Here are five of the most heart-humbling, awe-inspiring, and joy-producing words we will ever hear. As many have said, “Here is the gospel in five words.” Those who are justified are those who willingly admit to being ungodly, and thus are willing to trust in Christ alone for their godliness. They understand that their ungodliness is such that self-justification is not possible.

Our salvation is not a disinterested, detached act of God. On the contrary, it is an act of compassionate, saving love. Christ died to show the all-surpassing, incomparable height, depth, width, and length of God’s love for us.

It is during such times that the gospel reminds us that our sanctification does not happen because we are willing to shed our blood but because Christ was willing to shed His. It is not our blood and sacrifice that has pleased the Father; it is the blood of His beloved Son. Thus, when the battle for daily holiness appears lost, encourage yourself with the words of the old saints: “I ain’t what I wanna be; I ain’t what I’m gonna be; but through the blood of Christ, I ain’t what I was.”

Election is eternal. God’s choices are as old as He is. When did God choose you? When you were born? When you believed? No. He chose you from all eternity. The electing purpose of God is from before the beginning and will be true throughout all eternity. A lady once told John Newton, “If God had not chosen me before I was born, he would have never chosen me afterwards.”60 The Bible speaks of God as the One “who saved us and called us to a holy calling, not because of our works but because of his own purpose and grace, which he gave us in Christ Jesus before the ages began” (2 Tim. 1:9).

Sin has a power unparalleled on earth. It is more destructive than an atomic bomb; more menacing than a terrorist plot; more ruinous than a plague of locusts; more devastating than ten tsunamis; and more horrible and scary than a thousand bogey-men. Those who have been caught in its grip can testify to this truth. Many have been the cries of those trapped in the darkness of sexual perversion and addiction with seemingly no way out. Even more have experienced the perpetual night of drugs and alcoholism with seemingly no light or even the promise of day. Listen to the men or women who cannot resist the latest bit of gossip. They want to stop, they want to resist, but the temptation to hear and pass on scintillating news is too strong. They are held captive by sin, and their struggles to escape appear futile. Is there an exit? Can those trapped in the grip of sin escape? Is it possible to be set free from the power of sin? As we conclude our trek through the New Testament looking at the glories of the blood of Christ for the redeemed, we read in Revelation 1:5: “Jesus Christ [is] the faithful witness, the firstborn of the dead, and the ruler of kings on earth. [He] loves us and has freed us from our sins by his blood.” Freedom from sin is possible—by Christ’s blood.

Remind yourself daily that Christ did not shed His blood for nothing. The most valuable commodity in the universe, namely, the life of Christ, was given for our souls. This should remind us of how valuable God considers our lives to be. He has delighted to call us sons and daughters. Consequently, there is a favor and blessing upon those for whom Christ died.