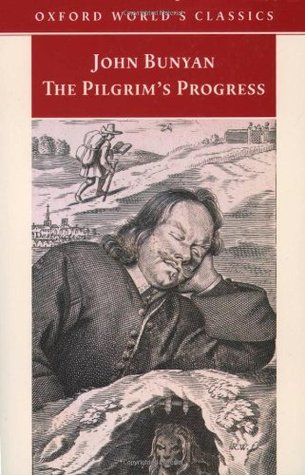 First sentence: As I walk'd through the wilderness of this world, I lighted on a certain place, where was a Denn; And I laid me down in that place to sleep: And as I slept I dreamed a dream.

Premise/plot: The first part of The Pilgrim's Progress concerns Christian and his journey--his pilgrimage. The first book opens with him greatly grieving his sins and desperate for answers on how to rid himself of the burden on his back. His family, his neighbors, his friends no nothing of this burden, this weight. They're thinking: CHRISTIAN HAS LOST HIS MIND. WHAT HAPPENED TO HIM? The time has come for Christian to decide between the old and the new, to count the cost, if you will. He decides to go on a quest, to find relief or deliverance. He's soon directed to the wicket gate and the narrow path within. But his journey won't be quick and easy and painless. It won't be a path leading to health, wealth, fame, and happiness. It won't be a comfortable path, a take-it-easy path, a this-is-your-best-life path. It will have hills and valleys and DITCHES. He'll have to FIGHT for every step and breath. There'll be plenty of blessed moments on this path. He'll find close friends--Faithful and Hopeful. He'll learn A LOT from the people he meets--the guides and porters and watchmen. He'll learn even from his enemies. There's not a dull moment on the way. The second part of The Pilgrim's Progress concerns Christian's wife, Christiana, and their four children: Matthew, Samuel, Joseph, and James. Mercie joins them from the start. And they are led by a conductor, Greatheart. Her journey is not the exact same as her husbands. Some familiar places are revisited--old friends are met again. But Bunyan uses this second book to further his instruction.

Both books are allegories. Both are "dreams" the author had. Both are definitely didactic in nature. But didactic in a creative way. I've about determined that my Pilgrim's Progress name would be Reads-all-hours.

My thoughts: Pilgrim's Progress remains relevant. I think every generation could learn something from this one, if they'd make the attempt. It might take reading it with open minds and an awareness of what is at stake--then and now. It is a book of IDEAS.

For example, early in the book there's an exchange between Pliable and Christian.


Pliable: And do you think that the words of your Book are certainly true?
Christian: Yes verily, for it was made by him that cannot lye.


To go back is nothing but death, to go forward is fear of death, and life everlasting beyond it. I will yet go forward. (36)

Therefore thought I, what God says, is best, though all the men in the world are against it. (60)


© Becky Laney of Operation Actually Read Bible
Posted by Becky at 8:30 AM

I grew up with this one.

I always loved the references to this book in The Little Women.

The story seems boring but I love the way you wrote the review.