Book Review: Your Sins and Mine 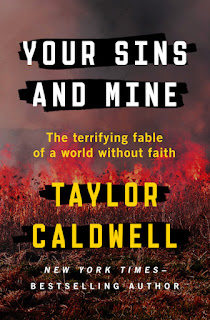 First sentence: My father was no different from other men; he had the wisdom of hindsight. He was also a countryman, and had never been far from the place where he was born, and had always lived close to the earth. So when he told us later of what he had seen in early January—a few months before the strange and awful things had come to pass—we discounted it as superstition, for he was what used to be called a “fundamentalist.”

Set in a farming community, readers meet Pete and his family. George has two grown sons--both veterans. Edward fought in World War II and came home blind. Pete fought in Korea. Both "boys" are married now with children of their own. They all live on the farmstead. One January evening, George is out late stargazing and notices something eery and ominous in the sky. He doesn't instantly know that the end has come. But. It makes him uncomfortable--increasingly uncomfortable as the drought lengthens month by month. By spring, he fears the worst: no crops. Lest you think he's panicking much too much, you should know: this drought is world-wide effecting every country, every nation. And starvation may be the least of their problems...

My thoughts: I loved this one. I absolutely loved it. This one would pair really well with Pat Frank's Alas, Babylon. It has a lot to say about war, about nuclear weapons, about society, about governments, about the environment.


And the sun shone, cloudless, in the sky, and the rivers dropped and the seas shrank and the creeks and brooks dried up and the mountains were sear and the valleys yellowed—all over the world. The land hated us, the violated land, the faithful land, the exploited and gentle land. The land had decided that we must die, and all innocent living things with us. The land had cursed us. Our wars and our hatred—these had finally sickened the wise earth. We did not know then that we stood indicted as the enemy of life.…

“We’ve got just one court of appeals now,” my father said, “and I don’t suppose most of you have given it any thought. Oh, I suppose you’ve prayed for rain, in church. But have you ever prayed: ‘God have mercy on me, a sinner,’ like the publican in the Bible? I guess you haven’t; your faces are the answer. I wonder how many of you even know your Bible? I wonder how many of you know we’re all being punished, and that we’ve had a sentence of death handed to us?” “Yes, a sentence of death,” he said, with authority. “Because every man in the world is a sinner against every other man, and against God. It isn’t only all the wars we’ve had in this century. We’ve forgotten God.” My father tightened his belt and ran his hand over the stubble on his chin. His blue eyes were vivid—vivid and condemning—as they traveled slowly over every face in the room. “I’m no politician. I’m a farmer, just as you are. When we were little fellows we took it seriously when the parsons told us we owed a duty to our fellow man, and that the things, of the spirit are more important than the things of the body. Every church told its people that; every church still does, though mostly the parsons speak to empty rows. We don’t hear these things with our ears any more. Why? Because every one of us has come to believe that the things of the body are the only valuable things, and we’ve scrambled for them over the rights of all other men. We’ve become too materialistic, too atheistic. Look, I’m no orator. You know what I’m talking about.

We heard, over the radio that night, that rain was falling all over the world in gushing floods. And for the first time we learned that the drought had been worldwide. It rained for many days, and the farmers plowed joyously in it and sang, and set their crops, and held up their faces to the dark and pouring heavens. All over the world it rained, and the cruel sun was gone for a long time. The forests freshened and the rivers tumbled everywhere. But the wheat did not come up, and the fruit trees, though green as jade, did not put out any flowers, and the inundated earth did not brighten with grass. It remained lifeless except for bursting acres of poisonous weeds. Vegetables did not grow, though flowers bloomed everywhere—flowers which men and beasts could not eat.

We did not know at that time that millions of Bibles were being opened all over the world, and that churches were beginning to burst with new members. But the ministers did not speak of what was happening all over the country. They, too, had been given their orders. Fear hung over the world like a vast cloud.

My father spoke louder, moving in his chair indignantly. “I’ve heard you talk about the Sermon on the Mount as if it was just another Declaration of Independence. When you pray, you speak to God politely, and remind Him that we’d like to have a little peace on this earth. You mentioned once that the parables of Jesus are excellent examples of profound human psychology. That was the Sunday when you devoted your whole lecture to the ‘science of psychiatry,’ and what it can do for disturbed minds.” His voice became even louder and was touched with anger. “You mentioned God in passing, but there was a hell of a lot more of Freud in your lecture! Disturbed minds! You’re damned right we’ve got disturbed minds. And why? Because our parsons think it primitive to talk about an ever-present God in the affairs of men. It never occurs to them that a human soul is thirsting for the living God, and hungering to know He is there for the asking.” His voice softened and deepened. “They come to you in grief and bewilderment and pain and you quote textbooks at them, and deny them the bread of life.” “George,” said my mother gently.

“There is still something a man can say to God that He wants to hear. And when He hears it, perhaps He will spare us—but He wants the whole world to say it.”

It was my father’s custom to read the account of the Nativity on Christmas Eve. But on this night he opened the Bible to the Book of Job, and we sat about him and listened to the dolorous lamentations of an afflicted man. “The arrows of the Almighty are within me, the poison whereof drinketh up my spirit; the terrors of God do set themselves in array against me.”

Mr. Herricks came that night, brought to us by a neighbor’s belching tractor. We had not seen him for some time, and I was aghast at the change in him. He seemed weary and broken and very sad. Yet, as he shook my hand he smiled at me, and his youthful eyes became radiant. He had brought his own food with him, and my mother and Lucy prepared it and we all sat down together for our sparse meal. He told us that very few people, if any, came to church now. Either they were dead or dying, sick or desolate, unable to travel even a little distance, or nursing their children or their parents. He visited them in their homes, giving them what comfort he could. He looked at me directly, now. “The gospel of repentance,” he said. “How can I say to them: ‘Pray for forgiveness’? Wouldn’t it be cruel? But that is the only prayer which will save the world now. True repentance, true penance.