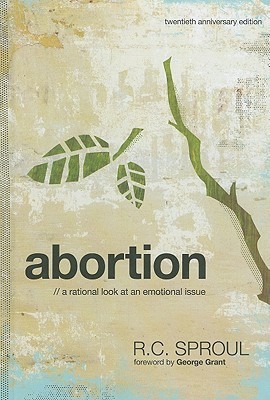 First sentence: A single issue rarely divides the American people. The few that have include slavery, the civil-rights movement, and the war in Vietnam. Yet another such issue is roiling in the present, an issue of such magnitude that our national solidarity is threatened. To many citizens, it is a matter of life and death, and may be the most serious ethical dilemma ever faced by the United States. The issue is abortion.

Premise/plot: R.C. Sproul carefully and rationally explores both sides of the abortion debate. In the first chapter he sums it up rather well: "At the heart of the abortion issue rests one overarching question: Is abortion a form of murder? In other words, does abortion involve the willful destruction of a living human person?"
He concludes, "The abortion debate is not over whether or not murder should be legalized; it is a debate over whether or not abortion is a kind of murder. There is something wrong, however, with even using the word murder in this discussion. The word itself is highly charged. At times it is used as a virtual synonym for homicide. The law, however, distinguishes between types of homicide. There is a difference between voluntary and involuntary homicide. A further category is manslaughter, both voluntary and involuntary. A clear delineation in the levels of the severity of these crimes exists under the law."


When does life begin? At what point in the continuum of human development do we have a living human person? Does life begin at conception? Does it begin at birth? Or does it begin at some point between these poles of progress, such as at quickening or viability? The answer a person chooses to this question often determines his or her position on the abortion issue.

Sproul has one specific audience in mind: "This book is addressed primarily to those who are not sure about the ethics of abortion. If you remain uncertain, I urge you again not to engage in abortion unless you are absolutely certain for clear and sound reasons (which I'm not aware of) that abortion is an ethically justifiable action. The simple adage of common wisdom applies to you: "When in doubt, don't."

My thoughts: What a great book! I thought it was clearly written--and passionately written too! He's writing to the 'neutral' and 'undecided' crowd of people. Or he says he is. I'm not sure who is most likely to pick up this book and read it cover to cover. I imagine plenty of Christians who are already pro-life will pick it up and read it. I do think it would make for a good book discussion.