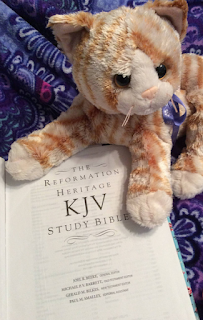 So I started reading the KJV Reformation Heritage Study Bible on Easter weekend. I am LOVING it so much. Usually when I attempt to read a study bible, I soon realize that the notes are going to be something that I skip most of the time, with an occasional skim. Not so with the KJV Reformation Bible. There are notes that clarify the KJV text itself. There are notes that point you to Christ, to the glory of God. There are notes that amplify the meaning and application of the text. It's not just notes in Matthew that are proving enlightening. Time and time again, the notes have proven themselves to be worth my time!!!


© Becky Laney of Operation Actually Read Bible
Posted by Becky at 10:22 AM