Book Review: The Work of Christ 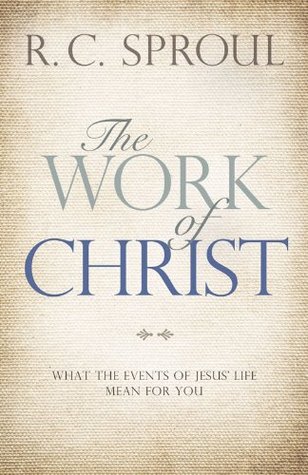 
If Jesus merely needed to die on the cross to save His people, He could have descended from heaven as a man on the morning of Good Friday, gone straight to Golgotha, died on the cross, risen, and left again. Our sin problem would be fixed. He did not need to be born to Mary in a stable, go through all the trials and tribulations of growing up in this fallen world, or endure the animosity of the Jewish leaders during His ministry. However, Jesus did not live those thirty-three years for nothing. In order for Him to qualify as our Redeemer, it was not enough for Him simply to go to the cross and be crucified. If Jesus had only paid for our sins, He would have succeeded only in taking us back to square one. We would no longer be guilty, but we still would have absolutely no righteousness to bring before God. So, our Redeemer needed not only to die, but also to live a life of perfect obedience. The righteousness that He manifested could then be transferred to all who put their trust in Him. Just as my sin is transferred to Him on the cross when I trust in Him, His righteousness is transferred to my account in the sight of God. So, when I stand before God on the judgment day, God is going to see Jesus and His righteousness, which will be my cover. By His obedience, He redeemed His people for eternity.

I loved, loved, LOVED reading R.C. Sproul's The Work of Christ. This one would be great to read any time of year. (It's not just an Advent book or Lent book.) It would be a great choice for bible study groups, book clubs, or sunday school classes. But, of course, it would be great for individuals to use on their own as well. (It has some built-in features that make it ideal for group study, however.)

The subject of this one is obvious--Jesus Christ, his person, his work, his mission. The book is all about glorifying Jesus Christ. Not unnecessarily separating his person from his work, so that one could dissect and diagram salvation in all its minute details. To love Christ more, to know Christ better--these are the aims.

R.C. Sproul writes in chapter one, "IN THEOLOGY, WE MAKE a distinction between the person of Christ and the work of Christ for various reasons. But even though that distinction is important, we must never let it become a separation, because the person of Christ is intimately connected to His work. We understand His work largely from the perspective of the One who did the work. Conversely, the work of Jesus reveals a great deal about who He is. So, His person and His work may be distinguished but never separated."

I love, love, love the fact that this one does NOT begin with his birth, with the incarnation. Instead it goes to "eternity past," to the ages before "in the beginning." It is stressed that Jesus' death on the cross was not an alternate plan, a plan "B," a last-minute course correction.

In eternity before creation, the Father initiated the concept of redeeming the creation He knew would fall. He designed the plan of redemption. The Son was given the assignment to accomplish that redemption. The Holy Spirit was tasked with applying Christ’s work of redemption to God’s chosen people.

The incarnation of Christ was not an afterthought or an impulse of God. Rather, it was part of God’s plan, for He had promised His people a redemption tied up together with the covenant that He had made with the patriarch Abraham. That plan was carefully mapped out, so that a definite time was set for Jesus to be born.

Once this has been established, it does give a traditional step-by-step, event-by-event overview of every aspect of Jesus' time on earth. Scripture is his guide.

Jesus not only had to die for our sins, but also had to live for our righteousness. If Jesus had only died for our sins, His sacrifice would have removed all of our guilt, but that would have left us merely sinless in the sight of God, not righteous. We would not have done anything to obey the law of God, which is righteousness. In theology, we distinguish between the passive obedience of Jesus and His active obedience. The passive obedience of Christ was His willingness to submit to the pain that the Father inflicted on Him as He hung on the cross. He passively received the curse of God there. His active obedience was His whole life of obeying the law of God, whereby He qualified to be the Savior. It was by His perfect obedience that He became the Lamb without blemish. The covenant with Moses declared that everyone who fulfilled the law received the blessing and that those who disobeyed the law received the curse. What did Jesus do? He obeyed the law perfectly, so He earned the blessing and not the curse. At the cross, our sin was transferred to His account and was laid upon Him. That meant He received the curse, not the blessing. But in our redemption, His righteousness is imputed to us, so we receive the blessing and not the curse we deserve. Jesus would not have had that righteousness if He had not lived a life of perfect obedience. The bottom line is that Jesus’ life of perfect obedience was just as necessary for our salvation as His perfect atonement on the cross. The reason is that there is a double imputation: our sin to Him and His righteousness to us. That is what Scripture is getting at when it says, “THE LORD OUR RIGHTEOUSNESS” (Jer. 33:16).

When God justifies His people, He does not do it by a unilateral act of forgiveness, because to do so without propitiation, without satisfaction, without atonement would be a complete violation of His justice. God will not wink at sin. He simply will not pass over it without exacting a punishment for it. The elaborate ritual of the Day of Atonement shows us the need for a blood sacrifice to propitiate the wrath of God and satisfy His justice.

Believers have been purchased, and the price was the blood of Christ, the life of Christ, for in Jewish categories the life was in the blood. In the Old Testament, it was not enough to scratch an animal to get blood for a sacrifice. The animal had to shed its blood in death, and so did Christ to pay for sins. Again, in the Old Testament picture of redemption, many times the one who would make the purchase to buy someone out of slavery was a relative (Lev. 25:47–49). That relative was known as the kinsman-redeemer, the person who would pay for the liberation of his brother, sister, mother, or other relative. In the book of Ruth, Boaz functions as a kinsman-redeemer for Ruth. Likewise, in New Testament categories, Jesus is the supreme Kinsman-Redeemer, who makes payment for His adopted children on the cross.

If Jesus had lived a life of perfect obedience and offered Himself as a perfect sacrifice once and for all in His death, how would we know the sacrifice satisfied God? How would we know that His offering actually propitiated the Father? In the resurrection, the Father said that He received the perfect sacrifice of Christ. He accepted it for the justification of the ungodly. Therefore, the Father said, “I am satisfied,” and removed the curse from us.


© Becky Laney of Operation Actually Read Bible
Posted by Becky at 10:22 AM