Book Review: The Cross of Jesus 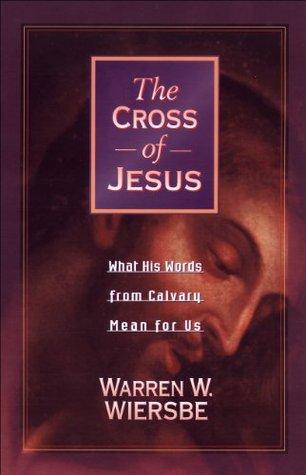 The Cross of Jesus: What His Words From Calvary Mean for Us. Warren Wiersbe. 1997. 144 pages. [Source: Bought]

I really enjoyed reading Warren Wiersbe's The Cross of Jesus. I read it during Passion Week and found it to be quite helpful in focusing my thoughts Godward.

What Wiersbe presents is old, not new; traditional, not flashy. His book focuses on the WHY of the cross. And in some ways it's a much needed reminder. We live in a society that during the rare times it discusses the Christian faith, the life and death of Christ, it leaves out the WHY completely. Perhaps because the concept of sin is more offensive to the public, to society, than any curse word.

So the book is relevant and needed. Why? Because there are essentially two types of readers. First those who do not actually know the good news (or the bad news). The book's simple message can be quite liberating. The truth will set you free. Second those who have "grown up" in the church and have a tendency to ignore the truths of the gospel because they're so familiar and "boring." If you think the death and resurrection of Jesus Christ is BORING then the problem is not the book but your heart.

The gospel is something that we need to preach to ourselves daily. This book falls in line with this goal.


When Jesus came to earth, he knew that he came to die; so let’s listen to the Master himself as he explained the Scriptures to those two discouraged disciples on the road to Emmaus. The cross was a divine assignment, not a human accident; it was a God-given obligation, not a human option. Jesus was not murdered; he willingly laid down his life for his sheep (John 10:15–18). His death was a necessity in the eternal plan of God.

Our Lord’s death and burial looked like defeat for God and victory for the enemy, but it was just the opposite.

Like the lamb on the altar, Jesus died as a substitute for us who deserved to die. The Jewish priests were careful to give as little pain as possible to the animal being sacrificed, but Jesus’ body was treated like a building being destroyed. It was a substitutionary death, a cruel death and a vile death, for he was like a serpent lifted up and made a curse. But his was a voluntary death, the Shepherd willingly dying for the sheep, the seed willingly being planted in the ground and producing new life.

The fundamental problem lost sinners face isn’t that they’re sick and need a remedy. The problem is that they’re “dead in trespasses and sins” (Eph. 2:1) and need to experience resurrection. Religion and reformation may cosmetize the corpse and make it more presentable, but religion and reformation can never give life to the corpse. Only God can do that. “But God, who is rich in mercy, because of His great love with which He loved us, even when we were dead in trespasses, made us alive together with Christ” (Eph. 2:4–5).

How does Jesus impart this gift of life? Through his Word. “Most assuredly I say to you, he who hears My word and believes in Him who sent Me has everlasting life, and shall not come into judgment, but has passed from death into life” (John 5:24). In each of the resurrection narratives we’re examining, Jesus spoke to the dead person: “Young man, I say to you, arise” (Luke 7:14); “Little girl, arise” (Luke 8:54); “Lazarus, come forth!” (John 11:43). In each case, the living Word spoken with divine authority gave the dead person life. The Word of God possesses life. “For the word of God is living and powerful.…” (Heb. 4:12). Those who receive that Word by faith have been “born again, not of corruptible seed but incorruptible, through the word of God which lives and abides forever” (1 Peter 1:23). Even though they are dead in trespasses and sins, lost sinners can hear the voice of the Son of God as the Spirit of God uses the Word to declare their need and the grace of God that meets their need. “So then faith comes by hearing, and hearing by the word of God” (Rom. 10:17).

What do you see in your heart when you watch unsaved people acting like unsaved people? Do they irritate you, repel you, make you angry? When Jesus looked at lost sinners, he saw them as helpless and harassed sheep, wandering hopelessly without a shepherd. He was moved with compassion by what he beheld (Matt. 9:36). He also saw a waiting harvest that would become a wasted harvest if somebody didn’t bring in the sheaves (Matt. 9:37–38; John 4:35–38). He saw sinners as diseased patients needing the remedy for sin which only the Great Physician could provide (Matt. 9:9–13).

No one is ever saved by accident, for meeting Jesus Christ is a divine appointment.

Some careless people have the idea that hell is just “heaven with the lights turned out.” They think that in hell they’ll enjoy friendship and fellowship, just as they do with their sinner friends here on earth. “We don’t care if we go to hell,” they say glibly. “After all, we’ll have plenty of company there!” But hell is a place of suffering, separation, and loneliness; it’s not a place of friendship and fun. If hell isn’t serious, why did Jesus die? If hell isn’t real and terrible, then the cross of Christ is a mockery and his death a scandalous waste.

The closer you get to people, the more you discover the burdens they carry and the battles they fight.

At the age of thirty-three, most people are saying, “It is beginning.” But at the age of thirty-three, Jesus was saying, “It is finished!” He didn’t say, “I am finished.” It wasn’t the lament of a victim overwhelmed by his circumstances; it was the shout of a victor overcoming all his enemies. In the Greek language in which John wrote his Gospel, this statement was only one word of ten letters—tetelestai. In the Greek, it means, “It is finished, it stands finished, and it always will be finished.

We are not really prepared to live unless you we prepared to die. Much of what goes on in this world is part of a continuous battle against death, but death wins in the end. Death is an appointment, not an accident, and only God knows the day and the hour when our life will end.