Book Review: Prayer of the Lord 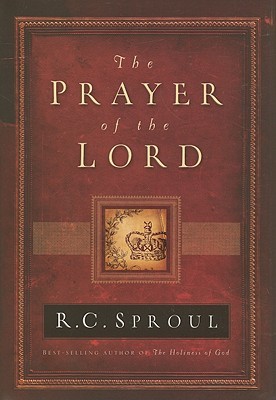 First sentence: A FEW YEARS AGO, when I happened to be in San Diego for a conference, I unexpectedly ran into an old friend of mine, George Miladin. George is a pianist and a master teacher—he used to host a televised teaching program for the piano called the “See and Hear Piano Series.”

For example, consider the fact that before he gives disciples a model prayer, he tells them how NOT to pray.

Sproul writes, "The first type of prayer Jesus condemned is hypocritical prayer... Hypocrisy has a devastating impact on the life of the church and on the representation of Christianity to a dying world. And so our Lord warns us here not to parade our piety before the world... We need to be careful here, because we Christians are enjoined to bear witness to our faith, which means making the invisible visible. But sometimes we think that one of the primary ways of bearing witness to people is by demonstrating our Christian spirituality with public prayer... That’s dangerous, because the motivation for prayer is not to display our spirituality before the watching world. Prayer is to be intensely private."

He continues, "The second kind of prayer Jesus condemned is pagan prayer. He said: “And when you pray, do not use vain repetitions as the heathen do. For they think that they will be heard for their many words.” Worship services often include the recitation of the Lord’s Prayer. The use of the Lord’s Prayer has a rich history in the church, and whenever we pray it or hear it, we are reminded of those priorities that Jesus sets before us as objects for prayer. Don’t get me wrong—I’m not opposed to the recitation of the Lord’s Prayer. However, there is a danger that this use of the prayer may be nothing more than a recitation. The praying of the Lord’s Prayer can become as mindless and as vain a repetition as the magical incantations and mantras that pagans use. Jesus did not give the Lord’s Prayer with the intention that it would be repeated mindlessly. When we pray the Lord’s Prayer, we need to pray it thoughtfully, giving attention in our minds to its content. It is not a mantra to be repeated without the engagement of the mind or heart. It is an example of godly prayer."

But the book is more than just a commentary on one prayer from the Bible. It is also a primer, of sorts, on the subject of PRAYER. Most of the book focuses on HOW to pray.

"The first thing you are to remember in prayer is who it is you’re talking to, because nothing will condition your prayer life more deeply than remembering that you’re in conversation with God, the sovereign Creator and Ruler of the universe. Second, you are to remember who you are. You are not God. You are a creature. So prayer is not a conversation between peers; it is not a fireside chat among equals. This is the creature speaking to his sovereign Creator."

The book is a GREAT read. Here are some of my favorite quotes:


Every time we say the Lord’s Prayer, every time we open our mouths and say, “Our Father,” we should be reminded of our adoption, that we have been grafted into Christ and have been placed in this intimate relationship with God, a relationship that we did not have by nature. It is a relationship that has been won for us by the perfect obedience of the Son, who received an inheritance that was promised to Him from the foundation of the world, which inheritance He shares with His brothers and sisters who are in Him.

First He listed “Hallowed be Your name,” second was “Your kingdom come,” and third was “Your will be done.” Those petitions may be distinguished one from another, but they’re so interconnected that we dare not divorce them from one another. I’m convinced that although we pray for the manifestation and the victory of the kingdom of God, it is futile to hope for the victory of God’s kingdom on this planet until or unless the name of God is regarded as sacred, because God’s kingdom does not come to people who have no respect for Him. Likewise, we pray that the will of God will be done in this world, but God’s will is not done by people who do not regard Him with reverence and with adoration.

I don’t think that anything reveals the state of a person’s soul more clearly than the words that come out of his mouth.

John Calvin said it is the task of the church to make the invisible kingdom visible. We do that by living in such a way that we bear witness to the reality of the kingship of Christ in our jobs, our families, our schools, and even our checkbooks, because God in Christ is King over every one of these spheres of life. The only way the kingdom of God is going to be manifest in this world before Christ comes is if we manifest it by the way we live as citizens of heaven and subjects of the King.

It is the highest expression of faith to submit to the sovereignty of God. The real prayer of faith is the prayer that trusts God no matter whether the answer is yes or no. It takes no faith to “claim,” like a robber, something that is not ours to claim. We are to come to God and tell Him what we want, but we must trust Him to give the answer that is best for us. That is what Jesus did.

When we ask God to give us our bread, we are not to request that He provide it weekly or monthly, but daily. We are to ask for a day’s worth of bread at a time. I believe Jesus had a much more profound reason for instructing us to request daily bread. I think He did so primarily to teach us that we need to acknowledge our dependence on the providence of God to sustain us day to day. He was saying that we should live in a daily dependence on the provision that God gives. This petition of the Lord’s Prayer, then, teaches us to come to God in a spirit of humble dependence, asking Him to provide what we need and to sustain us from day to day. We are not given license to ask for great riches, but we are encouraged to make our needs known to Him, trusting that He will provide.

We need to be eternally thankful that the Son stepped in to pay our debt to the Father, for as the Bible also makes clear, our debt was so great we could not possibly pay it.

Scripture often describes God as the Judge. He certainly will not judge us by our feelings. He will judge us by His law. His judgment will be perfect, absolutely just. He must punish violations of His law. Thus, we will certainly be found guilty of our crimes—unless someone else acts as a substitute for us, to take the penalty we deserve.

He doesn’t simply tell us to pray, “Forgive us our debts.” Rather, we are to ask God to forgive us “as we forgive our debtors.” In my opinion, that’s one of the most frightening lines in the Lord’s Prayer. If this condition is to be taken literally, we are finished. Manifestly, if God forgave me in exact proportion to the manner in which I distribute forgiveness to other people, I would perish. I just cannot be as forgiving as God; none of us can. But thank God that this is an aspiration rather than a condition, that Jesus is teaching us to aspire to mirror and reflect the kindness of God, to stand ready to forgive anyone who has sinned against us or offended us when they repent.

Yes, my sins have all been paid for, once and for all, on the cross. But Jesus taught us to pray for forgiveness as part of our ongoing communion with God. We need a fresh understanding, a fresh experience, of His grace and of His forgiveness every day. There is no greater state than to get up from your knees knowing that in God’s sight you are clean, that He has forgiven every sin you’ve ever committed. Without that grace, without that forgiveness, I don’t think I could live in this world for another sixty seconds. This is something we all desperately need, and we have but to ask for it.

When Jesus teaches us to pray, “Do not lead us into temptation, but deliver us from the evil one,” He not only is teaching us to pray for deliverance from testing, but teaching us to seek divine protection from the wiles of Satan. He is calling us to pray that we would not be exposed to the Devil’s onslaughts, to his attempts to entice us to sin or to destroy our confidence in our Savior by accusing us of our failures and of our imperfections.

When a child of God confesses his sin, God forgives it—it’s as simple as that. But as soon as God says that believer is forgiven, Satan shows up and says: “Oh, no, you’re not. You are still guilty.” When a Christian listens to him, he become burdened and weighed down with a paralyzing load of guilt. That guilt, in turn, robs the believer of his assurance of salvation.

The kingdom of God is not of the people, by the people, or for the people. It is a kingdom ruled by a King, and God does not rule by the consent of His subjects but by His sovereign authority. His reign extends over me whether I vote for Him or not.

I think the greatest weakness in the church today is that almost no one believes that God invests His power in the Bible. Everyone is looking for power in a program, in a methodology, in a technique, in anything and everything but that in which God has placed it—His Word. He alone has the power to change lives for eternity, and that power is focused on the Scriptures.

My tomorrow and your tomorrows are in the hands of God. We make our requests before Him and we trust our tomorrows to His sovereignty.

© Becky Laney of Operation Actually Read Bible
Posted by Becky at 9:39 AM