64. The Story Behind The Bible: The New Covenant 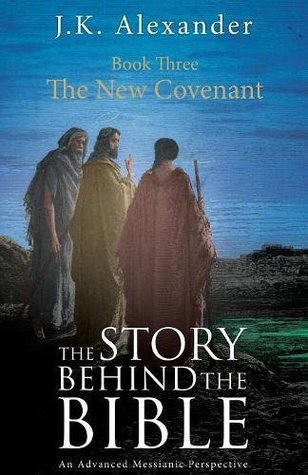 First sentence: This will be the final book in the Story Behind the Bible trilogy and it should be considerably different from the first two as we examine the manuscripts that re-emerged after nearly 450 years of prophetic silence.

I reviewed book one and book two in July. I took a bit of a breather before starting the third and final book in this atrocious trilogy.

Atrocious? Yes, atrocious. It's been a while--we've both had many, many sleeps--so I'll refresh your memory a bit.

Alexander's trilogy is not as innocent as you might expect based on the title. It is neither a) a story of how we got our Bible b) a story of how the Bible came to be written, canonized, etc. c) a summary of the big story of the Bible. Oh, it attempts a bit of summary here and there. But. Here's how I see it:

Either a) you've never read the Bible and his summarizing and speculating and (pulling stuff completely out of nowhere that makes no logical sense in any way) will confuse you more than not. It won't really serve you well if you want to know what the Bible is all about, what is going on, the big picture, how things fit into context, big themes, etc. If you've never read the Bible or sat under good, thorough teaching of the Word, you're likely to conclude that ALL Christians are absolutely illogical nuts without a speck of common sense. OR b) you've read the Bible for yourself; you've sat under good preaching; you know the truth because you know THE TRUTH. And so when you read Alexander's book you'll see that it is horrible, awful, no good, very bad.

Of course it's possible that for those that love crazy, wild, wacky, conspiracy theories, those that will believe just about anything if they're told that by so believing they will prove how clever they are that they are smarter than those that reject such illogical theories will eat this series up like candy.

If you had not read the first two books in the series, there's a chance that you might read a good chunk of this one without realizing the author's poor foundation of biblical truths. For better or worse. In other words, book three could be worse than it actually is. Not that it is good theology--not by a long shot--but it could be worse.

"But God wasn't on His throne at this time. He was being a mortal child in Bethlehem."

He has a whole essay-ish bit on the myth of Jesus' poverty. He asserts that Mary, Joseph, and Jesus were quite wealthy and were never poor. Mary and Joseph were from wealthy families? Joseph of Arimathea was Mary's uncle? "Uncle" Joseph was the "First Swiss Bank of the Messiah" and the guardian of the family's wealth.

His speculation on John the Baptist was intriguing. He believes that his father, Zachariah, was murdered by someone within the priesthood in the inner court of the temple, and he was 'in hiding.' John rebuked the Pharisees because he knew one of them might very well by his father's murderer? I am not saying I am trusting Alexander's storytelling. But it did make me realize I'd never given any thought whatsoever to John the Baptist's private life and how he came to be who he was.

Alexander believes that the Lord Jesus ministered only one year and not three. The three year ministry of Christ is a myth propagated by the dogmatic old school.

"Satan's influence is still very much with us today. His ill will is carried out and spread abroad by many minions great and small, from the wickedly wise to the mean and clueless."

That I can believe. False teachers fit in there somewhere between wickedly wise and absolutely clueless.

The beatitudes are time-specific. I guess that would be a relief for those who take Alexander at his word.

"If mortal physicians could figure out how to accelerate the vibration of the electrons in a person's body, a very big IF, then their patient's bodies could heal themselves of any mortal ailment almost immediately. Just step into the acceleration chamber and your highly empowered body, now accelerating toward immortality, would purge and heal mortal afflictions effortlessly and instantly. Whether subatomic, just plain spiritual, or both, Jesus was able to heal with a touch or a command and He was able to share this incredible power with his closest disciples."

"The disciples' description of Jesus transfigured is virtually identical to how shaman masters describe the King of Paradise that often appears in the shaman nether world that the shamans refer to as paradise."

Alexander has whole theories on paradise and heaven and the after life in general. Believe none of them.

Alexander asserts that Jesus would never support communism or socialism. Good to know.

"All will be changed, and each person will be a young semi-immortal version of the mortal self. A man and his grandfather may become close friends in the millennium but they will not have the same grandfather/grandson relationship. They will be about the same age with similar memories, some shared, and will each have a new life, new goals, duties, and opportunities...."

He goes on for pages but essentially little worth considering.

He goes on a great deal--this is one of his key rambles in the three books--about how Cain was not Adam's son but the product of Eve and What-Would-Be-the-Serpent (a human gardener working for Adam who became possessed by Satan). And how Cain's descendants are the evil Kenites. Remember in Alexander's wacky theology, Adam and Eve weren't the only humans, just the only human priest and priestess. There were many lowly humans that served them.

He speculates on the first age of the earth and how "the angelic host of this world apparently spent the first thousand or more years of life as earth immortals learning physics and earth knowledge before being transformed into angelic beings suitable for the higher realm of Heaven. There was no devil, and all or most eventually fulfilled the time as earth immortals and were transformed for entry into Heaven. The Bible indicates that it was after most were transformed and adapted for the higher realm that iniquity was found in Lucifer and he began the seduction, deception, and rebellion that ultimately destroyed the first age..."

Again he rambles on and on...but he's not fooling anyone....I hope.

"Much of the dark history of mankind is not a result of human nature but rather the influence of a congenital wickedness present in one of the primeval families of man."

If that helps you sleep better at night....no, still too unbiblical. It's convenient that you can blame all the "evil" behavior of the world...that person must descend from Cain...but nope, nope, nope.

"A few things we do know about the disposition of souls. God can naturally create original souls, but also God and/or His divine science can relocate an existing individual into a new earth immortal or mortal vessel for a whole new journey through the mortal, physical world. This is, by and large, what is taking place as children are born each day. Scripture gives us clear evidence of this, confirming that God knew most of us before not just this age but several prior ages of this world ever dawned...."

See what I said about his ideas NOT being harmless?

"We are attempting to raise the bar a bit form outdated, less informed visions and ideas from the past."

Is that what all heretics say in general?

He has a long essay-ish bit about how Jesus--after the age of twelve--grew up in Britain. I'm just going to leave that there. But apparently that is why his hometown didn't remember him...again his theory includes good old Joseph of Arimathea.

When Jesus told his disciples to preach the gospel to the Lost Tribes of Israel he was telling them to go to the British Isles.

Paul's letters were just letters not meant to be taken all that seriously by us non-recipients. I guess like the Beatitudes they are time specific?

In his "summary" of Romans, he urges readers not to try to understand Paul's writings on GRACE or the law and the gospel...just go to his section on grace in book two of the trilogy. He writes clearer than Paul. I'm not lying. He really does boast this.

Before Jesus was born to a virgin and named Jesus, he lived as the priest Melchizedek.

Paul also spent a good bit of time in Britain. There is a lost chapter in Acts. It was hidden by God's design because the world wasn't ready to know yet that the British and Scandinavian peoples are the lost tribes of Israel. But now the world is ready.

He apparently hates the book of James! "I will not fault James for misunderstanding Jesus and having problems with doctrine. Many do. I will merely advise readers that, in this writer's opinion, his letter is very thin and it seems for every two paragraphs that are quite well taken, there is one that is off the mark or misleading. I will leave it to the individual to decide which is which if they choose." I guess after his boasting that he was better at "clearly" teaching than Paul that this boast isn't a shock?

He has lots of opinions on Revelation--many do. But I'm tired of revisiting all my notes. This review is long enough, right?

But. Before I go, I've got good news. Revelation is place-specific (according to Alexander). Americans need never fear that they will have to endure any of the contents of Revelation for they will never be influenced by the Antichrist or taken in by the Beast and his prophet. America is the devil's blind spot. The whole book doesn't apply to us because we're super special--probably because we descend from the British folk. I don't even have words at this point.

One other wacky point before I really go. Apparently Jesus will spend eternity getting rebirthed just for the fun of it!!! After all, he is going to want to spend some time in a mortal body enjoying himself without having to suffer.

He leaves us with a hopeful benediction in which he addresses God as the Great and Ancient Falcon.

I hope I've persuaded you by now that this book is truly atrocious.