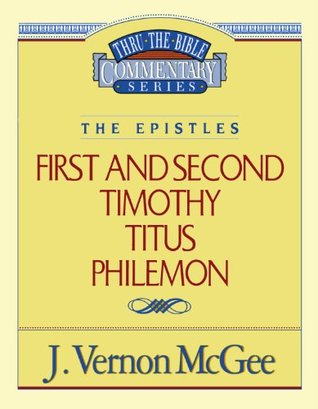 1 and 2 Timothy, Titus, Philemon. (Thru the Bible #50) J. Vernon McGee. 1978. 192 pages. [Source: Bought]
First sentence: The First Epistle to Timothy introduces us to a new set of epistles which were written by Paul.
I am reading the Bible in 2020 using the daily M'Cheyne (Robert Murray M'Cheyne) plan. I thought it would add a layer of substance to in addition to the four chapters a day, to also read commentaries for those chapters. For that I am using Matthew Henry's Commentary on the Whole Bible. But the plan goes through the New Testament (and Psalms, I believe) twice. So now that I've finished Henry's commentary for the New Testament, I am tackling the New Testament commentary section of J. Vernon McGee's series.This is not my first time reading J. Vernon McGee. I've read probably twenty or so of his commentaries. Most recently 1 and 2 Thessalonians.
This was a super-timely read. Of course, since McGee's books are saturated with Scripture, and Scripture is always timely and relevant, that doesn't come as a big surprise. But it's good to know that the Word can and does GROUND you. McGee offers plenty of wisdom and insight in this commentary of FOUR books of the Bible. He covers each chapter though perhaps not each and every single verse.
Quotes from 1 Timothy
From 2 Timothy
From Titus
From Philemon
© Becky Laney of Operation Actually Read Bible
Posted by Becky at 4:35 PM