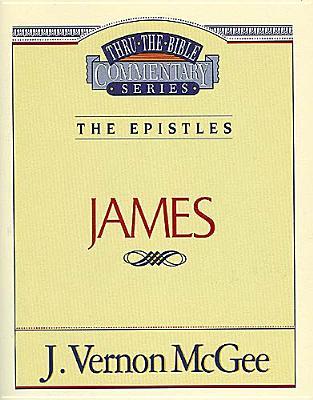 James. Thru the Bible #53 J. Vernon McGee. 1975. 120 pages. [Source: Bought]
First sentence: The Epistle of James is the first in a group of epistles customarily called General Epistles, which includes James, 1 and 2 Peter, 1, 2, and 3 John, and Jude. They are designated as general or “catholic” epistles in the sense that they are universal, not being addressed to any particular individual or church, but to the church as a whole.
I am reading the Bible in 2020 using the daily M'Cheyne (Robert Murray M'Cheyne) plan. I thought it would add a layer of substance to in addition to the four chapters a day, to also read commentaries for those chapters. For that I am using Matthew Henry's Commentary on the Whole Bible. But the plan goes through the New Testament (and Psalms, I believe) twice. So now that I've finished Henry's commentary for the New Testament, I am tackling the New Testament commentary section of J. Vernon McGee's series.This is not my first time reading J. Vernon McGee. I've read probably twenty or so of his commentaries. Most recently Hebrews.
I really am LOVING McGee. This has been the best idea--to correspond my Bible reading with commentary reading.
James is a little book with a BIG, BIG, BIG bite. McGee's bite is mighty as he shares his insights on James.
Quotes:
© Becky Laney of Operation Actually Read Bible
Posted by Becky at 4:03 PM