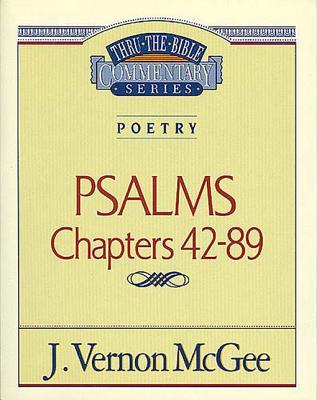 Psalms 42-89 (Thru the Bible #18) J. Vernon McGee. 1997 (really earlier). 192 pages. [Source: Bought]
First sentence: Psalms 42–72 comprise the Exodus section. As in the Book of Exodus, we will see God’s people in a strange land, a suffering people away from the Land of Promise. The heel of a dictator is on them.
I am reading the Bible in 2020 using the daily M'Cheyne (Robert Murray M'Cheyne) plan. I thought it would add a layer of substance to in addition to the four chapters a day, to also read commentaries for those chapters. For that I am using Matthew Henry's Commentary on the Whole Bible. But the plan goes through the New Testament (and Psalms, I believe) twice. So now that I've finished Henry's commentary for the New Testament, I am tackling the New Testament commentary section of J. Vernon McGee's series.This is not my first time reading J. Vernon McGee. I've read probably twenty or so of his commentaries. Most recently First and Second Timothy, Titus, and Philemon.
McGee loves/loved the book of Psalms. He loved it while he was on earth and I am sure he is still loving it up in heaven. The book of Psalms is traditionally arranged in five books. McGee associates each section or book of Psalm with a book of the law: Genesis, Exodus, Leviticus, Numbers, and Deuteronomy. This is a completely novel concept to me. But I'm open to the insights he gives in his commentary.
In this book, he will focus on the "Exodus" (Psalms 42-72) and "Leviticus" (Psalms 73-89) sections of the Book of Psalms.
Quotes:

© Becky Laney of Operation Actually Read Bible
Posted by Becky at 10:42 AM