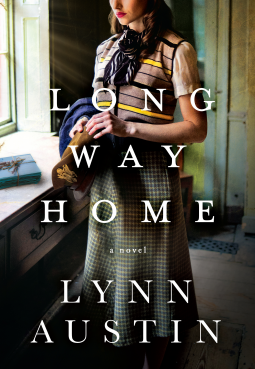 Long Way Home. Lynn Austin. 2022. [June] 391 pages. [Source: Review copy]
First sentence: "I know it looks hopeless," I told Jimmy Barnett's father. "But we can't give up until Jimmy is better. Until he's home again."
Long Way Home is an intense, compelling read set during and shortly after the Second World War. There are two narrators to this historical novel.
Peggy Serrano is a young woman from a broken home. She's found solace in a neighboring family, the Barnetts. For years, they've made her feel welcome, and at a time when her own home was anything but welcoming. She works for Mr. Barnett, a veterinarian, as his assistant. She's great with animals, perhaps not as great with people. Their son, Jimmy Barnett, has returned home from the war a broken man--deeply depressed and troubled. He attempts to take his own life which leads to his hospitalization in VA hospital. But Peggy (and his parents) refuses to give up on him. She'll do ANYTHING to help Jimmy. And she is the mastermind of quite a project to help him regain his mental health. She'll follow any and every clue to figure out what happened to him during the course of the war.
Gisela Wolff is a young Jewish woman fighting for survival and to keep her family together. Her story begins in 1938, I believe. (Peggy's story begins in 1946.) The Wolff family is able to emigrate out of Germany to Cuba--however, the St. Louis, the ship which is carrying around 900 Jews, is not allowed to land in Cuba or in any other port. They plead with the world, and the world printed the news but no country, no government, stepped up and welcomed these people who were essentially running for their lives. The ship returns to Europe and its passengers are dispersed to Belgium, France, England, (and maybe a fourth country that I can't recall???) The Wolff family is sent to Belgium. On board, Gisela met the love of her life, Sam Shapiro, and his family. These two both make their homes close to each other.
Both stories are well-peopled. There are SO many characters that play a role in both stories. And the characterization is so well done. This is a novel with depth, substance, and heart. It is INTENSE. It is impossible to not care about these characters. So as the war progresses--and its aftermath--it's TOUGH emotionally. I do think this one could be triggering. I'm not saying that's a bad thing. It's just that war is UGLY and horrific and atrocious. In a different degree, different way, the WAY that doctors and psychiatrists handled veterans' mental health was horrifying and heartbreaking. This is clearly depicted in the novel.
I was hooked from the first chapter. I was. I read it in two or three days. I never wanted to put it down. I always wanted to keep reading more, more, more. I was so invested and engaged with both stories, both narrators. My review will never do it justice. It couldn't. Even though I'm trying my best to talk about how HUMAN the characters are. It is both character-driven and plot-driven. There is plenty of suspense.
It is not necessarily an easy read. One of the themes is loss of faith. How do you hold to faith--be it Jewish or Christian--when the world is falling to pieces. When you have witnessed with your own eyes truly horrific, atrocious, heart-breaking, scarring, haunting scenes. When you have experienced great loss again and again. There is no way to be prepared for what it is like to be there, to be surrounded, to have all these experiences to process. There seems to be no going back. So multiple characters do have really tough, really honest questions. And this book does not shy away from God-talk.
© Becky Laney of Operation Actually Read Bible
Posted by Becky at 10:50 AM