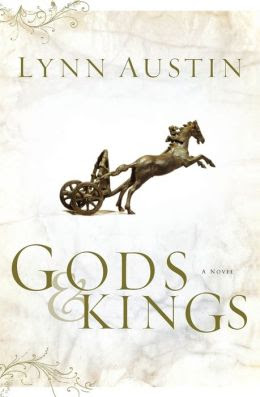 I love, love, love Lynn Austin's Gods and Kings. This was, in fact, the very first Austin book I ever read. After reading it, I wanted to read all of her books. (I still haven't managed that!) But I would definitely recommend her books to anyone looking for a great read. She's great at characterization, dialogue, relationships, and pacing. Her novels feel relevant and timely. Her writing just draws you into the story, into the culture.


“His death was honorable, my lady—a glorious sacrifice to be celebrated,” Deborah insisted. Abijah stared at her in disbelief. “What kind of mother could celebrate her child’s death? And what kind of father would kill his own child to save himself? Only a monster could do such a thing.” She could see that her words had shocked the servant, but she didn’t care. She looked down at her sleeping son again. “And only a monster would force his other children to watch.” “You’d better be careful what you say,” Deborah said, her voice a near-whisper. “Your husband is the king.”

THE NIGHTMARE JOLTED HEZEKIAH awake. He had dreamed of Molech again, the image so vivid that he’d felt the heat of the flames. He lay awake in the darkness, breathing hard, his heart pounding until his chest hurt. He listened for soldiers and distant drums, but the palace hallways were quiet. It was just a bad dream, he told himself. But when he gazed at Eliab’s bed, he knew that Molech was real.

“Our Temple worship must change as the world changes or it will eventually die out altogether. We’re so bound to tradition that we no longer listen to the people. I’m not talking about changing Yahweh’s laws, I’m talking about examining our traditions. If the men of Judah are drawn to the religions of the nations around us, then we need to ask ourselves why. It’s time we consider changing our outmoded traditions to fit the times instead of blindly clinging to the old ways.” Azariah could no longer restrain himself. “That’s outrageous!” he shouted. “Don’t listen to him!”

“This Temple has been trying to operate under your narrow-minded, archaic views long enough. Repentance! Where has that gotten us? The whole purpose of this Temple is to serve the spiritual needs of the people. Obviously our traditions aren’t meeting those needs or the people would come back. First we must draw them back to worship. Later we can wean them from their idolatry.”

“What’s wrong?” Hezekiah asked. “What do you want?” “Listen, all you leaders of Judah,” the man said. “You’re supposed to know right from wrong, yet you’re the very ones who hate good and love evil. You skin my people and tear at their flesh. You chop them up like meat meant for the cooking pot—and then you plead and beg with Yahweh for His help. Do you really expect Him to listen to your troubles? He will look the other way!” Uriah leaped to his feet. “Guards!” he shouted. “Take this man out of here!” “Wait,” Hezekiah said, holding up his hand. “Let him finish.” He didn’t need this stranger to tell him how much his people were suffering. And seeing the remains of the feast all around him filled Hezekiah with guilt. Maybe this stranger had answers. The hall gradually grew silent as the guests noticed the confrontation. “Why are you here?” Hezekiah asked. “Yahweh has filled me with the power of his Spirit, with justice and might. I’ve come to announce Yahweh’s punishment on this nation for her sins.” “Yahweh?” Hezekiah repeated. “One of Israel’s gods?” This all seemed like a dream he’d once had, and he had the peculiar feeling that this had happened before. Something about the man seemed familiar to him. He tried to remember but couldn’t. “Listen to me, you leaders who hate justice—you fill Jerusalem with murder, corruption, and sin of every kind. Your leaders take bribes, your priests and prophets only preach or prophesy if they’re paid—” “Your Majesty, tell the guards to take him out of here,” Uriah pleaded. “This man is either drunk or insane.” The banquet hall was dimly lit, and although the man’s face looked bruised and swollen, as if he’d suffered a beating, he didn’t appear drunk or insane to Hezekiah. He turned to Uriah and noticed that all the color had drained from the priest’s face. He was glaring at the stranger with a mixture of hatred and fear. Hezekiah had the eerie feeling that his elusive dream involved Uriah, too. He turned back to Micah. “You’ve made some serious accusations. I think you’d better explain yourself.” “My judgments are not my own. I’m here to plead Yahweh’s case.” “All right,” Hezekiah replied. “Let’s make this a formal hearing. You may present Yahweh’s case.” He sat down to listen, and Uriah sat grudgingly beside him. “Listen, O mountains, to Yahweh’s accusation,” the man shouted. “Hear, O earth, for Yahweh has a case against his people. He will prosecute them to the full: ‘My people, what have I done to you? How have I burdened you? Answer me. I brought you up out of Egypt and redeemed you from the land of slavery. I sent Moses to lead you, also Aaron and Miriam. My people, remember what Balak king of Moab counseled and what Balaam son of Beor answered. Remember your journey from Shittim to Gilgal, that you may know the righteous acts of the LORD.’ ” “I’ve studied our nation’s history,” Hezekiah cut in. He’d hoped to learn something that would help him, but he was growing impatient. “What does Yahweh want?” The stranger’s tone changed suddenly as he switched roles, pleading the case for the people. He dropped to his knees. “How can we make up to God for what we’ve done? Shall we bow down before Yahweh with burnt offerings and yearling calves? Will Yahweh be pleased with thousands of rams, and with ten thousand rivers of olive oil? Would He forgive my sins if I offered Him the fruit of my body? Shall I sacrifice my firstborn?” Sacrifice my firstborn. Suddenly the floodgate burst open, and the memories poured into Hezekiah’s mind. The rumble of voices and trampling feet. “Which one is the firstborn?” The priest’s hand had rested on Eliab’s head. “This one.” He remembered the column of smoke in the Valley of Hinnom and the pounding drums. He remembered the heat and the flames; the monster’s open mouth and outstretched arms. Molech. Hezekiah began to tremble. “Yahweh,” he whispered.

Gods and Kings is biblical fiction at its absolute best. It is the story of the young prince who grew up to be King Hezekiah. Two of the prophets it stars is Micah and Isaiah.

© Becky Laney of Operation Actually Read Bible
Posted by Becky at 6:30 AM

I don't think I have ready any Lynn Austin yet. My grandmother loves them though. I am going to have to look for this one... Seems like once I find something I like I tend to stay at that until I have consumed all that I can. I really need to work on being more diverse. (I really dislike that word but I lack a better description).

I've enjoyed many of Lynn's books, but I haven't gotten into any of her Biblical fiction yet. I'm always a little wary when an author fictionalizes Biblical accounts, but some do it well.