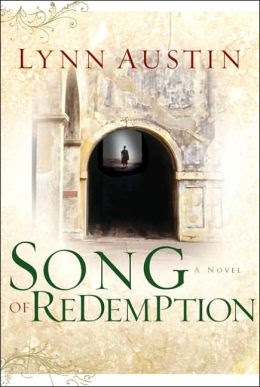 Song of Redemption is the sequel to Lynn Austin's Gods & Kings.  Now that Hezekiah is king, he has a unique opportunity. He can lead his nation back to God. He can read and study the law; perhaps, more importantly, he can follow it and require that others follow it as well. Of course, he cannot command his subjects to truly believe and have faith in Yahweh. But, he can forbid idol worship, destroy idols, and encourage rightful worship of the one true God. Not everyone in his kingdom is excited about the reforms. Even within the royal palace there are those that see this transformation as a big, big mistake.

Song of Redemption stars Hezekiah and his wife Hephzibah, Hilkiah and his son Eliakim, and two Israelite refugees: Jerusha and Maacah. Jerusha's story is truly haunting. While attending a wedding celebration with her family, the Assyrians attack killing many and kidnapping others. Jerusha is not killed; instead she becomes a slave. She travels with the invaders. She is repeatedly raped. Her life is a living nightmare.

Song of Redemption is an intense novel. Judah has stopped paying tribute to the Assyrians. War could come at any moment. And when Israel is defeated, their own defeat seems inevitable. Many fear the worst. Hezekiah clings to his faith. He believes that God can and will save them no matter the odds. His faith will surely be tested....

Song of Redemption has two strong relationships. Eliakim and Jerusha. Eliakim believes in God, but does he BELIEVE in God? Does his faith go beyond the surface? Is it a transforming faith? Jerusha comes into his father's house a broken woman. Her faith in God and in humanity being shaken. She doesn't feel worthy of a normal life, of friendship of family of love. Austin clearly illustrates redemption through Jerusha's story and her love story with Eliakim. Another woman readers get to know is Hephzibah. At the start of the novel, she was Hezekiah's only true wife but his least favorite in his harem. He'd had no use for her since completing the obligatory wedding week. She longs for love and a true marriage. She longs for a child or two. Hezekiah's new faith means that he turns away from his concubines and seeks a faithful and loving relationship with his wife. Here is an opportunity for both to grow in faith and love for better or worse. Unfortunately, Hephzibah is one of those in the palace who does not believe in God. She is a secret idol worshipper. Hephzibah is presented sympathetically as a sorrowful woman with a need so deep that only God can fill it.

Austin's biblical fiction is worth reading!


"Has Yahweh revealed to you what's going to happen to our nation--to our people?"
The prophet's expression changed, as if he had glimpsed something wonderful and terrible, awesome and dreadful. "Yes," Isaiah said. "But who has believed our message and to whom has the arm of the Lord been revealed? God has shown me things I'm not sure I fully understand yet. I've seen the promised seed of Abraham, the righteous Servant of Yahweh, a Light for the Gentiles and a stumbling block to our people--the Messiah, who will reign on the throne forever."
"Will God send the Messiah now--to deliver us from Assyria?"
The question seemed to annoy Isaiah. "You don't understand. He will be your offspring, but you and I won't see Him. And when He does come, many will hear Him but not understand."
"Rabbi, what about our present crisis?" (323-4)