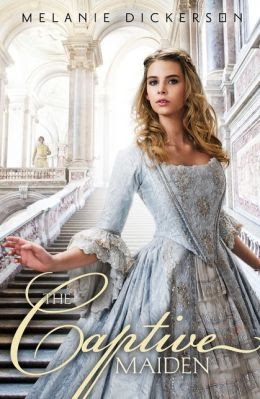 The Captive Maiden reminded me of two movies that I have loved in the past: Ever After and A Knight's Tale. It is a Christian retelling of Cinderella. Like Ever After, The Captive Maiden is free from magic. There isn't a fairy godmother, and there are certainly no singing mice! We first meet Gisela, our heroine, at the age of eight. Readers learn that her stepmother is cruel and her stepsisters follow their mother's example. We learn that Gisela loves horses just as her father did. We learn that Gisela sometimes slips into daydreaming about the day she met the Duke's son, Valten. This was all the prologue. The heart of the novel, as you may imagine, is set nine years later. Gisela is still crazy about horses, still doing plenty of manual labor, still putting up with her stepmother. In the opening chapters, Gisela catches a glimpse of Valten who has just returned. (It probably wouldn't surprise you that he's dressed as a commoner and not a noble lord.) They share a brief but meaningful conversation, a conversation centered around horses. There is definitely a spark between the two. Just one reason why Gisela is so determined to defy her stepmother and attend the three-day tournament anyway. (Her stepmother has forbidden her to go. She goes. In her mother's dress. With the help of a friendly neighbor.) She's chosen to sit in the gallery along with other beautiful, young, eligible maidens. She is playing dress up, in a way, since she's not really been in society before. But this taste of a better life is incredible. She gets to see all the action up close.

There is plenty of action and drama. And romance. Let's not forget the romance in this historical novel! I like the fourteenth century setting. I like the world-building. It was interesting, at least in small doses, to read of tournaments and jousting and such. I really like the characterization, particularly of HIS family. Gisela gets the opportunity to meet his family and spend time with his sisters. This was probably one of my favorite bits of the novel. I loved seeing the quiet scenes, the conversations, what happens when lives aren't at risk! (Her family was stereotypical and just what you'd expect in any Cinderella tale.)

The Captive Maiden is a companion novel to others in the series, especially The Fairest Beauty, a retelling of Snow White.