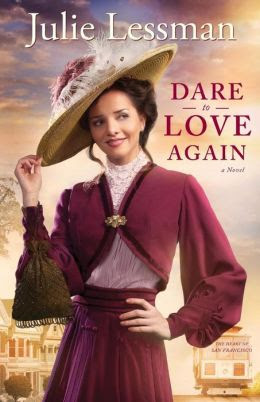 Love At Any Cost was the first book in Lessman's new Heart of San Francisco series. Dare to Love Again continues following the McClare family. Two of the three romances began in the first book: Cassidy and Jamie and Caitlyn and Logan. (Logan is "Uncle Logan." He is trying his absolute best to woo his brother's widow. Caitlyn is Cassie's aunt and Allison's mother. Of course, Allison isn't her only child.) The primary romance is between Allison McClare and Detective Nick.

Allison and Nick reminded me of Leia and Han Solo. For better or worse! Every time these two were in the same room together--expect a loud, somewhat obnoxious argument to follow. These two kept getting thrown together, however, and a truce had to be reached. Allison had to admit that she needed Nick, that working with Nick was a way to get what she wanted most. Nick, well, he had to learn a bit of tact. Nick did NOT lose authority or power. I doubt readers would really want him too. I certainly didn't. To tell the truth, Allison was so incredibly stupid that if Nick hadn't kept intervening it would have been a short, tragic book. Allison's "I can do whatever I want, whenever I want, no one can stop me" attitude HAD to be addressed. So. After her arrogant I can walk any street at night safely no one would dare harm me attitude was proven false--it was only outside intervention that saved her--she compromises a tiny bit. She wants to take lessons in self-defense. Nick is a busy guy: he was already working undercover, and as a guard, and now he is to give Miss Allison lessons--for six weeks or so. Hired by her uncle, he is also to sign a contract that he will not "make advances" to Allison. At the beginning, Nick thought such a thing to be ridiculous. He would NEVER EVER fall for someone like Allison. She is NOT the woman of his dreams--not even close. He can't stand her. Readers will guess these two will fall desperately in love with each other in a few months. Unfortunately, readers don't really see this process. Readers get lots of fighting scenes in the beginning, one or two make-a-truce scenes, and then flash forward to when the lessons are finishing up and their time together supposedly coming to an end, when they admit they want to be together. She definitely makes the first move.

As satisfying as Nick and Allison were in Dare to Love Again, I must admit that I really did not like Logan at all. I saw Logan as a villain. I am not sure that is what the author intended. Perhaps I should be cheering him on so he can have a happily ever after with Caitlyn. But. I found him sneaky, arrogant, manipulative, hateful, a bit power-hungry. He will control the family. He sets out to make trouble for Nick and he pushes and pushes until he succeeds.

I liked this one. Some scenes I did love. I liked certain relationships more than others. But I definitely am glad I read this one!

© Becky Laney of Operation Actually Read Bible
Posted by Becky at 9:32 AM