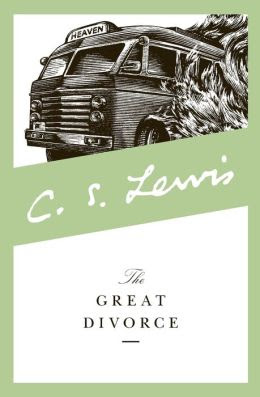 I seemed to be standing in a busy queue by the side of a long, mean street. Evening was just closing in and it was raining. I had been wandering for hours in similar mean streets, always in the rain and always in evening twilight.

The Great Divorce is a weird allegory rich in dialogue, but, for me it was too bizarre and philosophical. At its best, it offers overheard conversations between Solid Beings and/or Bright Beings and the deceased spirits and ghosts who are on holiday. The bus travels from hell to heaven, if you accept those designations as such. Here's where it gets BIZARRE, if the travelers go back to hell AFTER their holiday, then it was hell all along. If the travelers stay  and become solider, if they go with their guides to the mountains, then it was purgatory and not hell. The bus is met by guides. The protagonist realizes that these guides are solid, and, that all of the travelers or vacationers are not. This may or may not be the first time he realizes that they are more transparent or ghost-like. I wasn't quite sure by what I read. Regardless, that is the moment first-time readers realize that these are dead people on holiday. (Apparently, they can travel to "heaven" for their holiday, OR, they can travel back to earth and haunt it. I'm not sure how long the vacation-time lasts. If it was a day or two? Or longer?)

Regardless, the protagonist is on the bus for heaven. The person or guide he talks to is George MacDonald. But the book is more than the protagonist's conversations with George MacDonald. In fact, their meeting comes late in this novel. The hero wanders around eavesdropping. These conversations are between people (both solid and ghost) that we really know nothing at all about. One could argue that they are meant to stand for abstract thoughts or ideas OR social stereotypes. One can lift sentences or paragraphs from these conversations and find true observations OR true-sounding observations. I'm far from convinced that all within is biblically or doctrinally sound.

To keep it simple, one problem I had was that it seems to allow for the idea of purgatory and endless amount of second chances to believe after one dies. I don't believe that purgatory is scriptural. And I definitely believe that it is unbiblical to promote the idea that the dead are given opportunities to believe in Christ and go to heaven. I think it's very irresponsible in fact. Even in an imaginative allegory that readers are clearly told near the last chapter is a dream. The Great Divorce is anything but instructional. And while I am sure there are worse books out there on humans who have had gone to heaven and back, fiction or nonfiction, not being the worst is no reason to recommend it.

That being said, it's not without its true moments. You just have to be able to discern the difference between truths and half-truths and all-out lies. It is a thought-provoking read. It has a weird premise perhaps. But some of the conversations have great observations about humanity.


I do not think that all who choose wrong roads perish; but their rescue consists in being put back on the right road. A sum can be put right: but only by going back till you find the error and working it afresh from that point, never by simply going on. Evil can be undone, but it cannot 'develop' into good. Time does not heal it.


"But I got to have my rights same as you, see?"
"Oh no. It's not so bad as that. I haven't got my rights, or I should not be here. You will not get yours either. You'll get something far better. Never fear."


"But don't you know? You went there because you are an apostate"
"Are you serious, Dick?""
"Perfectly."
"This is worse than I expected. Do you really think people are penalized for their honest opinions? Even assuming, for the sake of argument, that those opinions were mistaken."
"Do you really think there are no sins of intellect?"
"There are indeed, Dick. There is hide-bound prejudice, and intellectual dishonesty, and timidity, and stagnation. But honest opinions fearlessly followed--they are not sins."
"I know we used to talk that way. I did it too until the end of my life when I became what you call narrow. It all turns on what are honest opinions."
"Mine certainly were. They were not only honest but heroic. I asserted them fearlessly. When the doctrine of the Resurrection ceased to commend itself to the critical faculties which God had given me, I openly rejected it. I preached my famous sermon. I defied the whole chapter. I took every risk."
"What risk? What was at all likely to come of it except what actually came--popularity, sales for your books, invitations, and finally a bishopric?"
"Dick, this is unworthy of you. What are you suggesting?"
"Friend, I am not suggesting at all. You see, I know now. Let us be frank. Our opinions were not honestly come by. We simply found ourselves in contact with a certain current of ideas and plunged into it because it seemed modern and successful. At College, you know, we just started automatically writing the kind of things that got good marks and saying the kind of things that won applause. When, in our whole lives, did we honestly face, in solitude, the one question on which all turned: whether after all the Supernatural might not in fact occur? When did we put up one moment's real resistance to the loss of our faith?"
…
"You know that you and I were playing with loaded dice. We didn't want the other to be true. We were afraid of crude salvationism, afraid of a breach with the spirit of the age, afraid of ridicule, afraid (above all) of real spiritual fears and hopes."

"I am telling you to repent and believe."
"But my dear boy, I believe already. We may not be perfectly agreed, but you have completely misjudged me if you do not realize that my religion is a very real and a very precious thing to me."


There are only two kinds of people in the end: those who say to God: "Thy will be done," and those to whom God says in the end, "Thy will be done." All that are in Hell, choose it. Without that self-choice there could be no Hell. No soul that seriously and constantly desires joy will ever miss it. Those who seek find. To those who knock it is opened."


But the whole thickening treatment consists in learning to want God for his own sake.

© Becky Laney of Operation Actually Read Bible
Posted by Becky at 11:31 AM