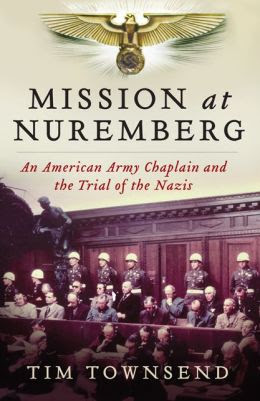 Wow. It almost deserves another WOW. Mission At Nuremberg is an amazing nonfiction read. It is incredibly compelling and quite thought-provoking. The full title of this one is as follows, Mission at Nuremberg: An American Army Chaplain and the Trial of the Nazis. Regardless of whether you are a Christian or not, I think this one is worth reading and discussing because of the subject matter. It is grounded in history; its subject is the Nuremberg trial. Townsend's focus is on the twenty-two defendants and their families, the two to three chaplains that did prison ministry, and a handful of the military personnel. It is a behind-the-scenes look at the Nuremberg trials, and an examination of war crimes. If there is one person who is the 'hero' of this one it would be the Lutheran chaplain, Henry Gerecke. He was an army chaplain who was offered an opportunity after the war. No one made him say "yes". The choice was his and his alone.

Mission at Nuremberg is a powerful story. It provides readers with so much to think about. It is very matter of fact. The narrative might resonate, but, the text is not deliberately manipulative. In my opinion. It shares the truth as it is: raw, ugly, and messy. But it also shares the gospel: able to transcend humanity's fallenness, able to save and deliver the chief of sinners. The subject matter is significant: just as significant now as it was then.


It was the victorious Allies who were judging the crimes of the Nazi leaders at Nuremberg, but it would be a pastor of the Lutheran Church-Missouri Synod who would try and convince those criminals that it was really God's judgment that they should fear. (8)

For Gerecke, the decision to accept the assignment wasn't easy. He wondered how a preacher from St. Louis could make any impression on the disciples of Adolf Hitler. Would his considerable faith in the core principles of Christianity sustain him as he ministered to monsters? (8)

He was terrified by the prospect of being close to the men who had tried to take over the world. Would he have to shake their hands? He imagined that simply feeling their breath on his face would be sickening. How could he comfort these Nazis who had caused the world so much heartache? How could he minister to the leaders of a movement that had taken millions of lives? (104)

He realized that God wanted something incredible from him…If, as never before, he could hate the sin but love the sinner, he thought, now was the time. (105)

Religion was something the Allies were also going to have to contend with, specifically, whether to supply the architects of the Holocaust with a Christian minister to comfort their spirits as they explained to the world the murder of six million Jews. The decision for adding this provision had come late and was possibly more controversial even than putting the Nazis on trial. (135)

Before the Nuremberg trials, there are no records of American military chaplains being assigned to provide religious support to the enemies of their country. Throughout history, captured clerics typically ministered only to their own flocks in prisoner-of-war camps where they, too, were prisoners. But the strict security at Nuremberg made it impossible to assign German army chaplains to look after the spiritual needs of Hitler's inner circle. Instead, with the world's attention turned to postwar Germany, the Allies decided that despite the charges of war crimes and crimes against humanity leveled against the defendants, these men deserved spiritual succor. (137)

Gerecke was frightened as they approached Hess's cell door. "How could I say the right thing, and say it in German?" he thought. When they entered, Hess, who was six three, stood up from his bunk, towering over Gerecke. "This is Chaplain Gerecke, who will be on duty here from now on," Eggers told Hess. "He will conduct services and be available for counsel if you wish to have him." Gerecke offered the Nazi his hand, and Hess took it. The act of an army chaplain physically touching a Nazi so repelled Americans that Gerecke was later severely criticized for even shaking hands with the defendants. It wasn't an easy gesture for the chaplain to make, and it didn't mean that he was unconcerned with their crimes. Yet he wrote later that he had offered his hand "in order that the Gospel be not hindered by any wrong approach I may make…I knew I could never win any of them to my way of thinking unless they liked me first." "Furthermore," he continued," I was there as the representative of an all-loving Father. I recalled too, that God loves sinners like me. These men must be told about the Savior bleeding, suffering and dying on the Cross for them." (140-1)

I can't wait to read this. Thanks for reviewing it.