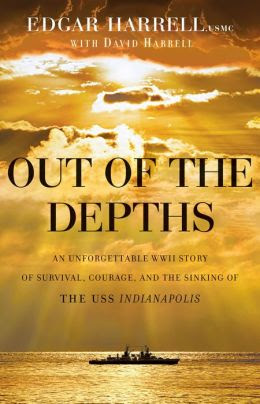 Every survivor of war has stories to tell--stories of triumph and tragedy, faith and fear--stories like mine, where fact is often stranger than fiction. Since that fateful night in 1945 when I stepped off a sinking ship into the unknown depths of the Pacific Ocean, there has never been a day when I have not reflected upon the horrors I experienced in the four and a half days of swimming in shark-infested waters. However, while those frightening memories remain vivid in my mind's eye, one memory eclipses them all--namely, the unfailing presence of God that sustained me.

What a testimony!!! Out of the Depths is an incredible book! It is the autobiography of Edgar Harrell, one of the marine survivors of the USS Indianapolis. The opening chapters provide context into Harrell's life, into the war, into the history of the USS Indianapolis before its tragic loss at sea in the summer of 1945. The heart of this book, however, may just be the five chapters detailing each day the survivors spent in the ocean waiting for a rescue that no one could be sure was coming. The final chapter provides context into the following decades. The survivors coming together seeking justice and recognition.

This autobiography is incredibly compelling. It is a powerful testimony. It is not just a powerful story of survival. It is a story that testifies of God's goodness and providence. It's a story that gives God the glory from cover to cover.

I loved this one. I absolutely LOVED it.


Gone was the attitude of pride that deceives men into thinking that there is no God, or if there is, they don't need Him. When a man is confronted with death, it is the face of Almighty God he sees, not his own. We were all acutely aware of our Creator during those days and nights. Our little seventeen-member prayer meeting attested to this. Every man knew he was dying. It was only a matter of hours. Only a miracle could save us. So we prayed for a miracle. Men prayed like I have never heard men pray. With inconsolable grief each man who was able to talk poured out his heart to God. With swollen tongues we did our best taking turns pleading with God for deliverance. And before one could finish, another would interrupt with his supplications. Another would then speak of his wife and children, and then cry out to God to be reunited with them. Because of dehydration, there were very few tears rolling down our grimacing faces. It was as though the ocean now contained them all. (100-1)

Our rescue was a marvel. And this doesn't even get into the fact that it is not humanly possible for a person to swim for four and a half days with next to no food or water. Not to mention swarmed by hungry sharks. Our survival truly defies reason. But I would also hasten to add that my survival, along with that of my comrades, was not the ultimate purpose in such a supernatural event. No, whenever God performs any feat that arouses the awe and wonder of His creation, He does so primarily to bear witness to His own glory. And it is to that end I remain committed, for indeed, such a story has no human explanation. Only a sovereign, omnipotent God could have orchestrated such a scenario, for our good and His glory. (119-20)

While there were other naval vessels sunk as a result of combat during the war, only the Indianapolis met her fate while leaving the enemy that sunk her completely unscathed. Worse yet, it was estimated that only one-third of the casualties suffered were a result of the initial attack. The other two-thirds were victims of Navy incompetence--a series of debacles that placed us in harm's way, unescorted and our SOS ignored, forcing hundreds of men to fend for themselves in the open sea. As I mentioned, the disaster is now considered the greatest naval catastrophe at sea in the history of the U.S. Navy. (149)