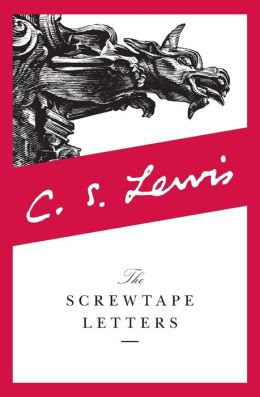 
I reviewed this Christian classic in 2009 and 2010. It's a book that I like to revisit every few years. It is a thought-provoking imaginative work. It's topsy turvy theology because of the demon perspective. Screwtape is writing letters to his nephew, Wormwood. Both are demons or tempters. So when they speak of their Enemy, they are speaking of God. And when they are speaking of Our Father, they are speaking of the devil. Many subjects are covered by Screwtape, all practical for the most part. The letters give readers something to think about. It's a book that requires your participation--your engagement. Readers have to discern what truths--if any--are to be found within these letters.

Wormword's human has become a Christian. Will advice from his wise Uncle Screwtape prove useful in keeping his human from maturing in the faith? Will he be able to woo his human away from the Enemy? Can he make his human's faith ineffective and irrelevant? Will Wormwood be able to use the World War to his advantage?

I shared a handful of quotes in my earlier review. I will not repeat those here. I've selected other quotes to share this time:


The trouble about argument is that it moves the whole struggle on to the Enemy's own ground. He can argue too, whereas in really practical propaganda of the kind I am suggesting. He has been shown for centuries to be greatly the inferior of Our Father Below. By the very act of arguing, you awake the patient's reason; and once it is awake, who can foresee the result? Even if a particular train of thought can be twisted so as to end in our favour, you will find that you have been strengthening in your patient the fatal habit of attending to universal issues and withdrawing his attention from the stream of immediate sense experiences. Your business is to fix his attention on the stream. Teach him to call it 'real life' and don't let him ask what he means by 'real.'


Keep his mind on the inner life. He thinks his conversion is something inside him and his attention is therefore chiefly turned at present to the states of his own mind--or rather to that very expurgated version of them which is all you should allow him to see.

In civilized life domestic hatred usually expresses itself by saying things which would appear quite harmless on paper (the words are not offensive) but in such a voice, or at such a moment, that they are not far short of a blow in the face. To keep this game up you and Glubose must see to it that each of these two fools has a sort of double standard. Your patient must demand that all his own utterances are to be taken at their face value and judged simply on the actual words, while at the same time judging all his mother's utterances with the fullest and most oversensitive interpretation of the tone and the context and the suspected intention. She must be encouraged to do the same to him. Hence from every quarrel they can both go away convinced, or very nearly convinced, that they are quite innocent.


Whenever they are attending to the Enemy Himself we are defeated, but there are ways of preventing them from doing so. The simplest is to turn their gaze away from Him towards themselves. Keep them watching their own minds and trying to produce feelings there by the action of their own wills.


Your patient has become humble; have you drawn his attention to the fact? All virtues are less formidable to us once the man is aware that he has them, but this is specially true of humility. Catch him at the moment when he is really poor in spirit and smuggle into his mind the gratifying reflection, "By jove! I'm being humble", and almost immediately pride--pride at his own humility--will appear. If he awakes to the danger and tries to smother this new form of pride, make him proud of his attempt--and so on, through as many stages as you please. But don't try this too long, for fear you awake his sense of humor and proportion, in which case he will merely laugh at you and go to bed.


© Becky Laney of Operation Actually Read Bible
Posted by Becky at 8:59 AM