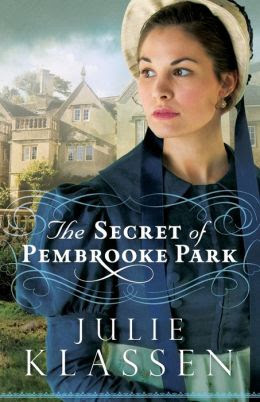 Abigail Foster is the heroine of Julie Klassen's The Secret of Pembrooke Park. She is one of two sisters. Her younger sister seems to be the favorite of both her parents. Rivalry with her sister comes up often in the novel. For not only do her own parents seem to favor Louisa, but, Abigail's first love--the boy next door--seems to as well. As soon as Louisa is old enough for her first season, well, his attention seems to shift dramatically to her sister.

The Foster family is having a difficult time. Soon after the novel opens, readers learn of their financial woes. The father's investments have been unwise, it seems. And for some reason or other, Abigail seems ready to take the blame. (Why is the father going to her for business/financial advice? And why is he ready to blame her for bad advice? Why can't he be responsible for his own decisions and actions?!) She feels guilty enough to give up her dowry so that her younger sister can have a season. The family home is sold as well. But there is some hope. A strange offer is made by a distant relative or a representative of a distant relative. The family is given the opportunity to live one year at Pembrooke Park, a country estate of sorts. It has not been lived in for almost twenty years. Locally it has a reputation. Bad things happen there. Strange stories are told about the house and about the people who've lived there in the past. Abigail convinces her father that this is a good idea.

It is a good thing that Abigail is ready for the change, because it seems she will be the one doing almost everything. She will be the one to go and live there--for the most part alone--while it is being renovated and cleaned and restored. Her father will come and go, but mostly go. (I was so annoyed by the father, even when he was there, he wasn't actually there. He had the flimsiest substance or development in terms of characterization.) Her mother and her sister will stay in London. While Abigail is on her own, she is on her own, and she takes some social liberties. Like visiting the local minister in the middle of the night in her nightgown and a shawl. It's not that she's immoral exactly. She's not. But she's not guarding her own reputation--or HIS reputation. She is disregarding the propriety of the times, the social norms or morals. Not just in one instance or even two, but in dozens of cases.

One of the things I enjoyed about The Secret of Pembrooke Park was the complexity of the plot. I loved that there were several stories, several mysteries, several romances. I loved that the stories were layered, that there was always something happening. The suspenseful plot definitely worked for me. This was a book I did not want to put down. As I was reading it, I NEEDED to find out what happened next. I didn't have the answers, and I wanted them!

I have mixed feelings about Julie Klassen's newest Regency romance. On the one hand, I found it an incredibly suspenseful read. It's a very good gothic read. If you have read and enjoyed Rebecca or My Cousin Rachel, there's a good chance you'd enjoy this one as well. The mystery kept me in suspense, kept me guessing. On the other hand, I found it disappointing in characterization and romance. It wasn't that I disliked the hero and heroine. It was that I was disappointed with the way the romance developed. Time and time again, rules were broken. I kept waiting for a scene where the two would be "forced" to marry one another to protect her honor and reputation, or, even his reputation since he was a minister. But it never came. For better or worse.

There were plenty of things I loved about this one. There were a few things I didn't exactly love. While I was reading it, I was very caught up in the story. It was only after I stopped reading it and started thinking it through that my feelings started to change about it. The book might not be a perfect fit for me, but, it was certainly worth reading.