Book Review: Not by Sight 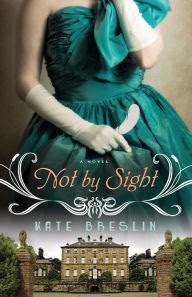 Grace is the heroine of the novel. When readers first meet Grace, they realize that she has very strong opinions. Readers learn that she's a suffragist, and that she very much believes that EVERY man should enlist. Those who don't enlist, deserve a white feather. Grace herself--along with her maid--are handing out white feathers to "cowards" when the novel opens. The hero, Jack, receives one from Grace at a party. Readers know either shortly before or shortly after that Jack is secretly working with the British government for the war effort. That he is 'undercover' in a way and trying to find traitors hiding in society.

Grace and Jack meet once more several months later. Grace's efforts have led her to join the WFC. (Her maid has also joined her.) She finds it TOUGH to say the least: physically and mentally exhausting. And labor doesn't come naturally to her. One mistake leads to a chance meeting between her and Jack. Soon they'll be meeting almost daily, more from duty than delight. At least at first.

Jack's clues have led him to suspect HER family. But is she involved?

Grace doesn't spend all her time focused on Jack. Far from it. She's too busy working and making friends with her coworkers, the other women from the WFC stationed at this estate. Grace chooses time and time again to move beyond first impressions and give other people second chances.

My least favorite thing about this book may just be the cover itself. The characters, for the most part, are interesting. Though I often found myself disagreeing with Grace, I couldn't help seeing that she had some strengths. And I did genuinely like Jack. Was Jack perfect? No. Not really. He had a LOT to learn, and, I'm not sure he learned all he needed to know by the novel's end. Grace kept growing up and learning hard lessons, but, Jack, well he stayed Jack. The plot. I liked it and didn't like it at the same time. The mystery element of it didn't thrill me. It didn't come as a surprise to me--the big reveal of who the villain was--and I guessed so early on that it was difficult to read the text without feeling that it was off, that it was purposefully trying to fool readers. I also wasn't as thrilled with Grace's "writing" ability as Jack was. Her descriptions which seemed to WOW him enough to encourage her to write didn't seem all that great to me. I am not saying that the novel cover-to-cover was written poorly. I'm just saying that when the heroine is trying so hard to "be a writer," it didn't work for me exactly.

Still, there was plenty I did like about this one. I liked the dialogue, for the most part. And Jack and Grace do seem to belong together. Also, perhaps with the exception of a few characters, the minor characters seem to be well-written and to BELONG in the story. I actually became attached to a few of them and wished to know more about them.

© Becky Laney of Operation Actually Read Bible
Posted by Becky at 11:00 AM