Book Review: The Most Eligible Bachelor 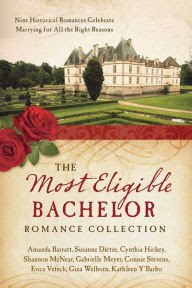 It depends completely on your expectations. If you are looking for premise-focused, almost gimmick-focused, novellas where the focus is 98% romance and 2% history, then this collection of nine novellas may very well satisfy.

The nine novellas are: "A Bride for a Bargain" by Amanda Barratt, "Love's Reward" by Susanne Dietze, "A Doctor's Agreement," by Cynthia Hickey, "The Highwayman" by Shannon McNear, "Four Brides and a Bachelor" by Gabrielle Meyer, "The Most Ineligible Bachelor in Town," by Connie Stevens, "The Archaeologist's Find," by Erica Vetch, "Baker's Dozen," by Gina Welborn, and "The Final Baker Bride," by Kathleen Y'Barbo.

The book starts off relatively strong with Amanda Barratt's A Bride for a Bargain. Of course, at the time, I didn't know it would be one of the strongest stories, and, I remember finding it a bit shallower than I would have liked. But looking back, it is one of the best of the book. Yes, the characters are not as developed as I'd like--in comparison with a full-length novel. But in comparison to most of the stories in the book, the characters are indeed developed. Ada McClane is a poor woman--tending a sick brother--who has just lost her job. Geoffrey Buchanan offers her a job: pretending to be his fiancee for three weeks. The job pays very, very well. Readers can predict that he will fall in love with her, and she with him, but it will take a while for both to declare their love for one another.

Love's Reward by Susanne Dietze was enjoyable enough, I suppose. But the premise didn't sit well with me. A "friend" writes an ad in a paper: WANTED: THE HEART OF SAN FRANCISCO'S MOST ELIGIBLE BACHELOR REWARD OF $1,000 TO THE UNMARRIED FEMALE WHO CAPTURES THE HEART OF DANIEL BLAIR, ARCHITECT, GUARANTEED PAYMENT BY A GENTLEMAN OF INTEGRITY. The problem for me? A gentleman of integrity wouldn't actually ever think of posting an ad like that about a supposed friend...let alone actually do it. And the ad is taken oh-so-seriously, and the readers have to put up with all these women throwing themselves at Daniel. Except for one, of course, who's known him for years and years. The story was slightly confusing at times. At best I feel neutral about this one.

A Doctor's Agreement by Cynthia Hickey annoyed me almost from start to finish. Why did it annoy me so much? I think because the heroine, Sadie, was so very, very stupid AND the hero, Zeke, was just as stupid. Sadie works for her father's newspaper, and, it is her oh-so-brilliant idea to have a contest to marry the town's new doctor off. Five women, I think, will be chosen to actively compete for the doctor's affection. He'll write up his thoughts about the contest for the paper. At the end, he'll choose one to be "the one." Reading the inner thoughts of the hero and heroine was incredibly annoying. She's madly in love with him but just KNOWS that he doesn't care for her in that way at all, that he could never, ever love her in return. And he's madly in love with her and just knows that she could never, ever, ever love him in return. And it's just pure ridiculousness that pushes this story forward.

The Highwayman by Shannon McNear is a story that the twelve-year-old me would have probably found giddy-making and just loved. The adult-me liked it well enough. A shy hero finds courage to court the woman he loves, but, only undercover dressed as a highwayman.

Four Brides and a Bachelor by Gabrielle Meyer was probably my favorite of the book. Probably. Luke Longley was my favorite hero. He is a missionary in need of a wife. There are four women for him to choose from. Most, if not all, are eager to be missionaries themselves and are in need of a husband in order to qualify for the mission field. I actually enjoyed the romance of this one.

The Most Ineligible Bachelor in Town by Connie Stevens was an okay story for me. It features an oh-so-shy hero, Micah North, who is in love with a beautiful young woman, Gabrielle, a woman who happens to already love him in return. She's just waiting for him to speak up and take an interest. The story may not have wowed me, but, it was a good, solid read.

The Archaeologist's Find by Erica Vetsch is an enjoyable novella. I liked this one very much. Definitely in my top three. The hero and heroine share a love of archaeology and an interest in all things Egypt. She's not aware that he's rich and therefore "suitable" according to her mother. And he's not aware that she's rich, so he doesn't think of her as out-of-bounds. He thinks marrying a rich socialite would mean giving up his dream. He wants someone to travel with him and live half the year or more in foreign lands. Overall, this is one of the better stories.

Baker's Dozen by Gina Welborn, what can I say? The hero wasn't very likable at all, in my opinion. And I almost cheered when the heroine, who had been in love with him for years and years and years, refused his proposal and said she was going to move on with her life. But then there was another chapter. This was another story where a LOT of women seem to be competing for a guy, for a proposal. It seemed very calculating. I just didn't care for it.

The Final Baker Bride by Kathleen Y'Barbo was a strong finish for the collection. I liked the way it started especially. But it didn't hold my attention start to finish, that could be more about my mood as reading than the story itself. Overall, I'd say it was definitely good.

More than a handful seem to be "inspired by" The Bachelor, and have women actually competing for the chance of getting the guy--getting a proposal. Many if not most of the women are very forward, let's say, and blunt. I will say, however, that the heroines always seem to be the exception to the rule. Every female character except the heroine from each of the stories, seem to be very forward, very blunt, very pushy, very competitive, more than a little immodest. Is that a generalization? Yes. Is it unfair? Somewhat. Because it isn't true for all nine stories. I know this. But is it true for at least four or five of the stories? Probably. Enough so that it overpowers the book so that that is what you remember.

Another issue I had with a handful of the stories was the stupidity of the main characters. For example, readers are expected to like a hero and heroine so incredibly, INCREDIBLY stupid that it feels like they couldn't recognize their own faces in the mirror.

I personally would have preferred stronger historical setting and details. At times, I thought the characters acted at odds with the times in which they supposedly lived. How they acted. How they spoke. It felt like contemporary characters dressing up, if that makes sense.

© Becky Laney of Operation Actually Read Bible
Posted by Becky at 9:58 AM