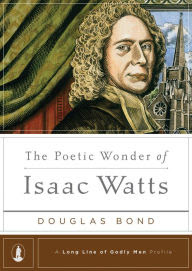 The Poetic Wonder of Isaac Watts is one of many titles in the Long Line of Godly Men series published by Reformation Trust. This particular title is not my favorite-and-best from the series, but, overall the series is excellent and worthy of your time.

Several chapters focus on the life and times of Isaac Watts. Readers learn about his childhood, his family life, his career as a pastor, educator, and writer. Readers learn, for example, that by the time he was a teenager, he was writing poems and hymns. Bond did a good job, in my opinion, of providing enough historical and cultural context for understanding and appreciating Isaac Watts. Readers may not be aware at how controversial hymn-writing really was without this context. Most churches only sang Psalms, and, the idea of singing anything other than Psalms was shocking.

Most of the book focuses on his writing career: his hymns and poems. Chapter titles include, "Watts' Sermon Hymns," "Watts as Lyric Poet," "Watts as Hymn Writer," "Watts as Poet Theologian," "Watts as Children's Poet," and "Watts as Psalm Interpreter."

The concluding chapter seeks to show that Watts' hymns are still relevant and necessary for contemporary times. He urges editors to leave Watts' lyrics alone, for the most part, and give congregations theologically RICH worship songs.


Every biblically mature generation in the church will want to contribute poetry and music to the church's worship--but, alas, so will every biblically immature one. Watts makes an excellent role model to guide the new generation of poets who presume to write lyrics for the corporate worship of God's people.

Some of Watts hymns include:

I love "Before the Skies."