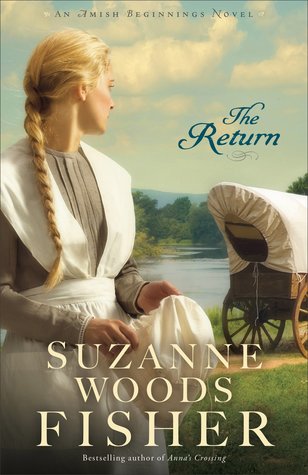 First sentence: As Betsy climbed up from the creek carrying two buckets of water, she heard the sound of her brothers' laughter, and then a man's deeper laugh.

The Return is the third book in the Amish Beginnings series by Suzanne Woods Fisher. The first two in the series are Anna's Crossing and The Newcomer. Several decades have passed and this novel mainly focuses on the next generation. One of the heroines, for example, is Tessa Bauer the daughter of Bairn and Anna. The other heroine is Betsy Zook.

Tensions are HIGH between the white settlers and the Native Americans. While many of the Amish are happy to be at peace--stay at peace--there are a few men in the community that are hotheaded and lack common sense and decency. John Elder, for example, is one advocating the philosophy that the only good Indian is a dead Indian. Anna and Bairn think differently, as do most of the characters in the novel. But HANS (the foster brother of Felix and Bairn) goes a bit nuts when Betsy Zook, the supposed love of his life is kidnapped. Tessa sees Betsy's kidnapping by Indians as an opportunity to win Hans affection and attention.

The narrative shifts between Betsy and Tessa--mostly. Betsy meets Caleb, a "half-breed" with a Mennonite mother and an Indian father. The two become super-super close. And if I'm honest Caleb is without a doubt my favorite character in the book. In fact I HATED Hans. (I probably shouldn't say that.)