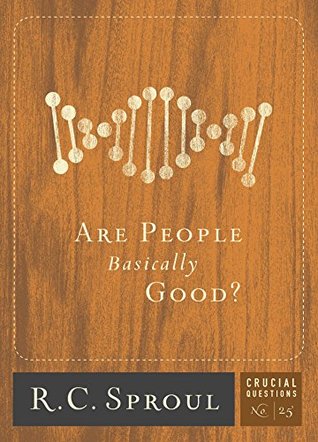 First sentence: When I was in high school, my biology teacher told me that my value as a person was $24.37. He was adding up the value of all the minerals in the body—zinc, copper, potassium, etc. Today, thanks to inflation, that total would be around $160. That’s still a paltry sum. But it is one way to take the measure of a man.

The question posed in this short booklet is "Are People Basically Good?" Your answer to that question says a lot about you and your worldview. I think it is in our human nature to answer, YES, people are deep-down basically good. But is human nature to be trusted in this regard? in any regard?

Also. What does the Bible have to say about the fall? about sin? Why is the doctrine of original sin so fundamental to a right understanding of ourselves? Can you hold a right opinion of humanity if you fail to have a right opinion of God? of God's holiness?

Lastly. What does the Bible have to say about salvation? about God's sovereignty in election? Do humans have free will? Do they have liberty? Apart from God's effectual call, would anyone ever choose to believe the gospel? Sproul argues that original sin has radically corrupted our free will, our desires. We do not desire God. We do not seek after God. We do not love God. We do not want to obey and in fact cannot obey God.

This is a very good--though brief--introduction to Total Depravity or Radical Corruption.

One theologian has said that how human beings understand their own existence determines how they think, how they behave, and the type of culture that they produce; thus, the culture that we live in is a product of our understanding of what it means to be human.

In this book, we will explore what Scripture says about the nature of man, including such related topics as the image of God and the reality of sin.

People are concerned about self-esteem, identity, and understanding who we are as creatures. The focal points in Western civilization include issues such as abortion, euthanasia, human relationships, peace, gender, sexuality, and labor/management difficulties. How we address issues in these areas will depend ultimately upon how we define man.

Part of the identity of humanity is our capacity for religion. But Calvin made the observation that man is a fabricum idolorum—an idol factory—so committed to religion that, even if he removes himself from the living God, he will replace his concept of God with a god made of his own hands. Luther, in similar fashion, commented that “Man, if he has no God, will make an idol,” because he has to have something.

In the Christian faith, we understand what it means to be human through the lens of Scripture. This key question—what is man?—is found even in the Bible, issuing from the pen of David: “What is man that you are mindful of him, and the son of man that you care for him?” (Ps. 8:4).

The proper focus of theology is God—His character, His works, His attributes. But John Calvin said that no one can really understand who God is without first having some kind of understanding of who we are as human beings.

According to Scripture, a crucial aspect of what it means to be human is found in the account of the creation of mankind. Humans, male and female, are defined as creatures made in the imago Dei, or the image of God.

First, to call man the bearer of the imago Dei differentiates man from God. First and foremost, we are creatures, meaning that we—finite, dependent, derived, accountable—are not God. We may bear the image of God, but the image of God is not God, but subordinate to Him. No mere human being is divine. The second point is that this phrase differentiates between humankind and all the other creatures in the world. It sets man apart from the animals.

One word that crystallizes the essence of the Christian faith is the word grace. One of the great mottos of the Protestant Reformation was the Latin phrase sola gratia—by grace alone. This phrase wasn’t invented by the sixteenth-century Reformers.

Two things that every human being absolutely must come to understand are the holiness of God and the sinfulness of man.

These topics are difficult for people to face. And they go together: if we understand who God is, and catch a glimpse of His majesty, purity, and holiness, then we are instantly aware of the extent of our own corruption. When that happens, we fly to grace—because we recognize that there’s no way that we could ever stand before God apart from grace.

When we sin, we want to describe our sinful activity in terms of a mistake, as if that softens or mitigates the guilt involved. We don’t think it’s wrong for a child to add two and two and come up with five. We know the answer’s wrong, but we don’t spank the child and say, “You’re bad, because you made five out of two and two instead of four.” We think of mistakes as being part of the human condition.

But as I said to that pastor, if one of us is wrong, it would be because he came to the Scriptures while wanting it to agree with him, rather than wanting to agree with the Scriptures. We tend to come biased, and we distort the very Word of God to escape the judgment that comes from it.

We are so accustomed to our fallenness and corruption that, while our moral sensibilities may be offended when we see someone involved in gross and heinous criminal activity such as mass murder, normal, everyday disobedience to God doesn’t bother us. We don’t think it’s that important, because “to err is human, and to forgive is divine.”

This aphorism suggests that it’s natural, and therefore acceptable, for human beings to sin. It’s implied also that it is God’s nature to forgive. If He doesn’t forgive, then there’s something wrong with His very deity, because it is the nature of God to forgive. But this is as false as the first assumption; it is not necessary to the essence of deity to forgive. Forgiveness is grace, which is undeserved or unmerited favor. We are so accustomed to sin that we do it all the time. We can’t define a human being without defining our humanness as fallen, and we can’t possibly maintain life itself apart from grace.

Today, we are taught that man is basically good, that we have imperfections and blemishes, but underneath all the surface problems, everyone is righteous. But the Bible simply does not teach that man is basically good. In his letter to the Romans, Paul writes: “As it is written, ‘None is righteous, no, not one’” (Rom. 3:10). This idea runs contrary to everything that our culture teaches. Maybe all he meant is that no one is perfect, some might say. But then Paul goes on to say, “No one understands” (v. 11a).

Saint Augustine famously prayed, “O Lord, You have made us for Yourself, and our hearts are restless until they find their rest in You.” There’s another prayer from Augustine that provoked one of the most serious controversies in the history of theology: “Lord, command what You will and grant what You command.”

We are creatures who are profoundly fallen, and whom the Bible describes as being in bondage to our own sinful inclinations. Augustine made a distinction in this controversy, saying that man has free will, or liberum arbitrium, but since he is fallen, he does not have libertas, or liberty—moral freedom from addiction to sin. He said that those who are fallen are addicted to sin.

We always act according to the strongest inclination that we have at a given moment; that’s the essence of making choices. That’s what freedom is: the ability to choose according to what you want. This is why Augustine could say man has a free will but he doesn’t have liberty.

The whole message of the Christian faith is that humankind, in the fullness of our humanity, needs redemption. We need a Savior.

© Becky Laney of Operation Actually Read Bible
Posted by Becky at 9:59 AM