Book Review: Are These the Last Days? 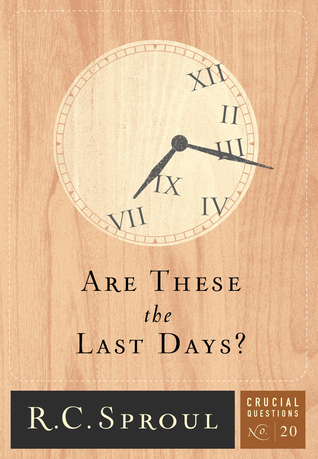 First sentence: In the middle of the nineteenth century, a serious potato famine struck the nation of Ireland. Facing starvation, multitudes of people fled to other countries to seek sustenance. Some boarded ships and sailed for the New World, with many finally landing in New York City. Among those immigrants was my great-grandfather, who came to the United States from Donegal in the northern province of Ulster.

Based on the title alone, readers might think this is a book about current events, about watching the news with Bible in hand looking for signs and clues and answers to when Jesus is coming back. But Are These the Last Days? is a commentary on the Olivet Discourse. Sproul seeks to unpack the meaning and relevance of Jesus' prophecy. Was the Olivet Discourse about the end of the Jewish age? Was it about prophesying about the destruction of the temple and the destruction of Jerusalem? Or was Jesus referring to END TIMES end times--the end of the world and the final judgment?

Sproul argues that "when Jesus spoke about “the end of the age,” I am convinced that He wasn’t talking about the end of the world, but about the end of the Jewish age." In other words, "It seems to me that the most natural reading of Matthew 24:29–35 would be that everything Jesus said would happen has already taken place in history. He was not referring to a yet-future fulfillment from our standpoint. He was referring to a judgment upon the nation of Israel that took place in AD 70."

After verse thirty-five, Jesus shifts his focus from 'the end of the age' (the end of the Jewish age) to the end of all ages (the end of the world). The first half of the prophecy has been fulfilled. Readers can have hope that the second will be fulfilled as well. It was not for his disciples to know WHEN the end of the world is to come. And it is not for us to know today. I'm always skeptical of anyone--everyone--who makes claims to the specifics. (This day, this month, this year, this generation).

All of us are slaves of one sort or another. We’re either slaves of Christ or slaves of sin. There’s no other option for humanity.

The most serious and fatal self-delusion of the wicked is their belief that God will not judge them. The Bible tells us that God is long-suffering and patient. The reason for this kindness and mercy is to give us time to repent and turn to Christ. But we should never assume that God’s gracious patience means that He won’t call us to account.


© Becky Laney of Operation Actually Read Bible
Posted by Becky at 11:55 AM