Book Review: What is the Relationship Between Church and State 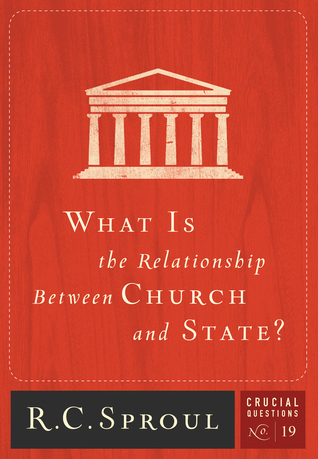 What is the Relationship Between Church and State? Crucial Questions #19. R.C. Sproul. 2014. 47 pages. [Source: Free download]

First sentence: A few years ago, I was invited to be the keynote speaker at the inaugural prayer breakfast for the governor of Florida.

R.C. Sproul examines an important, ever-relevant question in this booklet. The question? What is the Relationship Between Church and State? Other questions posed and answered include: what is government? where does government get its authority? what is the church? where does the church get its authority? are the purposes of the government and church the same or different? where did the phrase 'separation of church and state' originate? what did the phrase mean originally? how has the meaning changed through the centuries? what is religious freedom and why is it important? Not all questions receive equal treatment. It is a very short booklet, after all. But it is a thought-provoking one.

I would recommend this one!

In the United States, we often hear the phrase separation of church and state, but it should be noted that this phrase does not occur in the country’s founding documents. It is not found in the Declaration of Independence, the Constitution, or the Bill of Rights. It comes from a remark made by Thomas Jefferson about the principles that he believed were implied in the founding documents of the United States. But it has now become perhaps the only remaining absolute in American culture: the absolute principle of the absolute separation of church and state.

Government is a structure that is endowed legally with the right to use force to compel its citizens to do certain things and not do other things.

Saint Augustine made the observation that government is a necessary evil, for in this world among fallen human creatures, you will never find a morally perfect government.

All governments, no matter what structure they manifest, are representative of fallen humanity because governments are made up of sinful people.

Every single law that is passed restricts someone’s freedom. Some freedoms are good to restrict—such as the freedom to murder—and others are not. This is why we have to be exceedingly careful every time we pass a law.

There is a fundamental obligation of the Christian to be a model of civil obedience.

Every time I sin, I participate in the revolt against God’s perfect rule.

It is the function of government to enact laws, and those laws are designed to promote justice. God never gives the state the right to do wrong. The state does not exercise its authority autonomously, as a law unto itself, but is subject to the ultimate government of God Himself.

An important thing to note is that the power of the sword is not given to the church. The mission of the church does not move forward through coercion or military conflict. The emblem of Christianity is the cross.

There was to be no favoritism to any particular denomination or group of believers. This is the root of the principle of separation of church and state.

As Christians, we need to form our viewpoints from the Word of God, so that we gain a clear understanding of how the church is supposed to function, what its mission is, and how that mission is different from the role of government.

The church is called to be a critic of the state when the state fails to obey its mandate under God.

Among the longest words in the English language is antidisestablishmentarianism. However, this word is not merely a bit of trivia; it is key to understanding the relationship between church and state.

One of the unfortunate consequences of this foundational principle is the common assumption that all religions are not just tolerated but are equally true and valid.

The law does not declare who is right and who is wrong. All it says is that those disputes should not be dealt with in the civil arena. Instead, those are religious and ecclesiastical matters and are to remain outside of the scope and the sphere of civil government.

In today’s culture, separation of church and state has come to mean that the government rules without taking God into consideration. That is not the way this nation was founded.

The United States was founded on the principle of both church and state being under God. But today, we hate the concept of being answerable to God. We want to have a government that is free from the moral taint of theism. That’s not the original intent of the First Amendment or of the original articles that established our nation.

The kingdom of God is not built by an edict from an emperor or the might of an army. It is built through one means alone: the proclamation of the gospel.

The principle of civil obedience is that we are called to be in submission to authorities ruling over us—and not only when we agree with them. Indeed, Christians are called to be model citizens. Does that mean we must always obey? Absolutely not. There are times when Christians are free to disobey the magistrate, but there are also times when we must disobey the civil magistrate. If my boss told me to cook the books so that he could be protected from the charge of embezzlement, I would have to disobey. If a governmental authority told you that you had to have an abortion, you would have to disobey because you obey a higher authority. If the authorities say we’re not allowed to distribute Bibles or preach the Word of God, we have to do it anyway because we have a mandate from Christ to disciple the nations. This is why the free exercise of religion is so important. It gives the right to act according to conscience, but unfortunately, this right is currently being eroded in the United States.

God has established two realms on earth: the church and the state. Each one has its own sphere of authority, and neither is to infringe on the rights of the other. And as Christians, we are to show great respect and concern for them both.


© Becky Laney of Operation Actually Read Bible
Posted by Becky at 8:32 AM