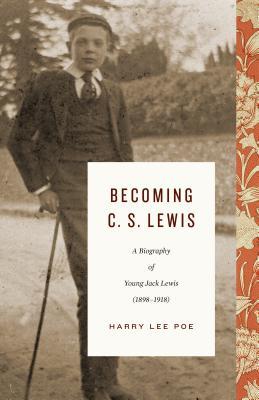 First sentence: Between the death of his mother in 1908 and his war service in 1918, young Jack Lewis made the transition from childhood to adolescence to young manhood.

I have a complex relationship with the author/theologian C.S. Lewis. I do. On the one hand, we share a birthday, and I adore almost all of the books in the Chronicles of Narnia series. (I LOATHE The Last Battle.) I really like Screwtape Letters. But when it comes to his theology, his theological writing, I have issues--some BIG issue, some tiny issues, but too many to ignore.

Who is the primary audience of this new biography? I would say that it would most appeal to scholars. A strong interest in history, literature, philosophy, the first world war would certainly help. A love of Lewis' writing--his literary essays, his philosophy, his nonfiction, his fiction--would be an absolute must. It isn't enough to merely love and adore the Chronicles of Narnia. One must equally love and adore his other books and articles as well.

The premise of this one is simple, "During his school days, the boy who would grow to become C. S. Lewis formed his most important tastes in music, art, literature, companionship, religion, sports, and almost every other aspect of life. While his ideas and critical thought about what he liked and disliked would change, his basic preferences came together during this period and formed the foundation out of which his later life grew." And..."The questions of C. S. Lewis that began to form in his mind during childhood and adolescence would compel him toward answers that resulted in his conversion to faith in Jesus Christ many years later."

This one is idea-driven. What ideas did C.S. Lewis hold during his childhood and adolescence? When did those ideas form? Did those ideas change throughout these years? Did these ideas change as he became an adult? Did they ever change? To what extent did he stay the same and to what extent did he change? What books did he read? When did he read them? Did he reread them? Did he talk about them with anyone? Did his opinions on those books, on those authors change over time? Are there any parallels between his own books that he would later write and those that he read? Are there any similar themes? What relationships were significant to him when he was eight? when he was nine? when he was ten? when he was eleven? when he was twelve? when he was thirteen? ETC.

So many WORDS. It's not that I didn't care at all. It's that I didn't care all that much. For example, do we really need to know how often a young Jack Lewis thought about sex? which friends he discussed sex with? what his sexual fantasies were? who he fantasized about? how Lewis viewed women at this time in his life? where he got his views of women from? I pick on this one issue--which I consider almost non-relevant to C.S. Lewis the author and theologian revered by Christian masses. Almost. I mean, I suppose it shows his fallenness. But still. And this is just one example.

All that being said...I can't deny the book was well-researched. He obviously spent A LOT of time finding out EVERY LITTLE THING he possibly could about C.S. Lewis. And I do believe there are a handful of readers in the world who will care because they share a similar obsession with anything and everything Lewis related. The details go to the extreme. But it's a solid read.