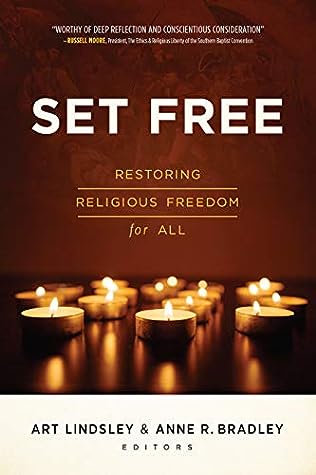 First sentence: Religious freedom is what the founding fathers called the first freedom, and it is one of the most important things the U.S. experiment gave the world. Legal scholars throughout this nation’s history have believed that the First Amendment of the U.S. Constitution recognized one’s right to lead life according to faith and religious moral code, not only in our churches but also in our homes, in our places of work, and in the public square. In recent years, however, that belief has been challenged. We view any attack on religious freedom as alarming because it threatens to negate the guarantee of individual liberty afforded to every person, regardless of faith.

Set Free is a collection of essays on the topic or subject of religious liberty. It isn't the work of one individual--but of many. There are many different approaches taken throughout the book, but one common assertion: religious freedom is fundamental for one and all.

The introduction prepares readers for what to expect:


In Chapter One, Os Guinness provides a sweeping survey of the present situation and what is at stake if we fail to address the threats to religious freedom.
In Chapters Two through Chapter Four, we look at religious freedom in the Old and New Testaments, focusing on key biblical concepts such as the image of God, the importance of freedom and responsibility, the place of conscience, and the way these biblical concepts influenced the debate on religious freedom at key points in history. John Redd, Barrett Duke, and Hugh Whelchel approach this topic from various directions.
Greg Wallace shows in Chapter Five how the idea of religious freedom developed from the period of the early church through the Reformation. In Chapter Six, Daniel Dreisbach explores the origins of religious freedom in America. It is important to note here that religious freedom arises from a biblical foundation and not from secular sources. Then in Chapter Seven, I note how the biblical view of freedom underlies political, economic, and religious freedom in the United States today.
In Chapter Eight, Anne Bradley and Joe Connors further explore the relationship between political, economic, and political freedom. They provide data that show the importance of religious freedom in allowing opportunities for voluntary associations—the building blocks of an emerging society. If this cultivated soil is present, economic freedom can flourish.
In Chapters Nine through Eleven, we look at our current situation along with the issues we are facing now or will likely face in the near future. Jennifer Marshall Patterson surveys the impact of sex and gender issues; Mark David Hall gives us a helpful survey of the way that religious accommodations have been addressed by America’s founders and, later, many legislators and jurists; and finally, Stanley Carlson-Thies demonstrates the significant contributions that faith-based organizations have made to our society. If these organizations are unreasonably driven out of business by being forced to do things that they cannot, in good conscience, do, society will be much, much poorer.

The approach taken is almost always, always scholarly and technical. I wouldn't be surprised if roughly half the pages of this one are footnotes and bibliography. But that isn't a con in my opinion. This subject is of great importance and significance. It becomes even more so as it is continually threatened not only in the United States but around the world. Any book that weighs in on the subject should be weighty in content.

I found myself agree with overall conclusions, for the most part, but I didn't always, always, always agree with the "reasons" why a particular author reached said conclusion. For example, I don't think religious liberty for ALL should be logically dependent on the arminian doctrine of free will. That was the position of one author in one chapter. Other chapters better tackle the WHY--having to do with the fact that ALL are created in the image of God, that ALL have a conscience, that ALL should be treated with dignity (do unto others...). I definitely enjoyed reading about the distinction between "tolerance" and "religious liberty."

I read this one a chapter or two at a time.