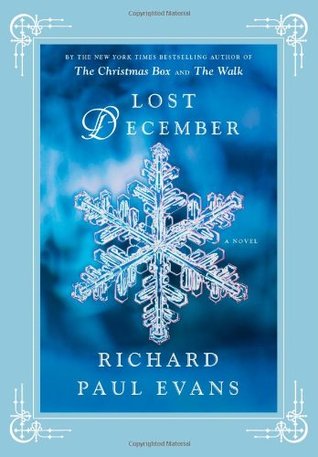 First sentence: My seventh grade English teacher, Mr. Adams, used to say, “No matter how thin the pancake, there are still two sides.” Two sides to every story. People mistake that little chestnut for wisdom—as if all real evil in this world can be explained away if we’ll but listen to the other side of the story. Tell that to your local serial killer. I believe that adage amounts to nothing more than moral laziness—a motto for people who carry moral compasses without needles. Make no mistake, all evil has its side of the story.

Premise/plot: Lost December is a modern adaptation of the parable of the prodigal son. Luke Crisp is the only son of a wealthy businessman, Carl Crisp. The family business is Crisp Copy Centers with hundreds of locations across the United States. Luke goes away to an Ivy League school to get his MBA. He falls in with a bad crowd, falls deep. These are his people, his tribe. Sean, the leader of the Wheaton Seven, convinces him that his father is just trying to mold him and shape him into a carbon copy of himself. There is no freedom or independence to be had so long as he just follows in his dad’s footsteps and does what is expected of him. Wouldn’t it be great fun to do whatever you want, whenever you want—no rules, no restrictions, nobody bossing you around, no responsibilities?! Luke takes his trust fund and his best friends on the vacation of a lifetime. But hard consequences follow...

My thoughts: Lost December is all about redemption and grace, a celebration of unconditional love. The father’s love for his son is unconditional and extravagant.

This was a compelling read and a quick one.