Book Review: Once Upon a Dickens Christmas 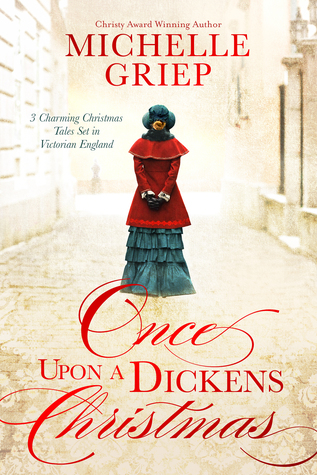 This book features three holiday-themed novellas with a strong romantic element. The three novellas are, "12 Days at Bleakly Manor," "A Tale of Two Hearts," and "The Old Lace Shop." Each one is also available to purchase separately.

First sentence of 12 Days at Bleakly Manor: Christmas or not, there was nothing merry about the twisted alleys of Holywell. Clara Chapman forced one foot in front of the other, sidestepping pools of. . .well, a lady ought not think on such things, not on the morn of Christmas Eve—or any other morn, for that matter.

Clara Chapman has had a hard time of it since she was jilted at the altar, and her family's fortune stolen. Destitute and living on the charity of an elderly aunt, she's getting by--barely. One holiday season she's offered a unique second chance. Travel to Bleakly Manor to spend the twelve days of Christmas with a mystery host and mystery guests for  five hundred dollars.

Clara isn't the only guest in need of a second chance. Each guest has had a second chance extended to him/her. Though each chance looks differently. For one prisoner, Benjamin Lane, that second chance is freedom. There's a catch once they arrive, however, only one guest will have his/her second chance granted. And there are some guests who will do just about anything to get what they want.

This one definitely has a dark, mystery vibe to it as well as a romantic one....for Benjamin Lane is the one who "jilted" Miss Clara...

First sentence of A Tale of Two Hearts: In the tiny back courtyard of the Golden Egg Inn, Mina Scott lowered her copy of David Copperfield to her lap and lifted her face to the October sun. Closing her eyes, she savored the warmth and the first line to a new adventure, as was her wont whenever Miss Whymsy stopped by and lent her a book. Though she no longer stared at the page, the shapes of the words lingered, blazed in stark contrast to the brilliance against her lids. What a curious thought, to be one’s own hero—for the only hero she wanted was William Barlow.

A Tale of Two Hearts reminded me of Georgette Heyer, which is a great compliment, in my opinion. I really loved this one! William Barlow has a dilemma. He needs a wife to help "prove" to his uncle that he's changed his lifestyle, settled down, and left his gambling ways behind him--far, far behind him. There's almost a deadline. Uncle Barlow will be choosing his heir soon--and it's between him and his cousin (who is married.) Can William Barlow find a woman willing to pose as his wife for an afternoon tea?! Perhaps. Mina Scott is the innkeeper's daughter. These two have grown friendly--though not inappropriately so--over the last year. She may be just the one to impress his uncle...

Will these two fall in love for real over the holiday season?!

First sentence of The Old Lace Shop: I have long abhorred black. It is a great abyss, sucking in the colours of the rainbow and wringing the life from them. The moniker of death. This year I will celebrate Christmas with holly and laughter and a large stuffed goose instead of dark looks and criticism. Too many years have I spent shut away in a stagnant town house without a morsel of cheer. No more. Today I’m free, finally and completely my own person, leastwise once I sign all the paperwork.

If A Tale of Two Hearts reminded me of Georgette Heyer, Old Lace Shop reminded me of Elizabeth Gaskell. Ivy is a widow who is looking for a new beginning. She's happy--more than happy--to sell all of her husband's businesses and holdings. But there is one--an old lace shop in a Northern manufacturing town--that she wants to keep for herself. She's the majority shareholder holding 51 percent. Who should turn out to be her business partner but an old love, a Mr. Edmund Archer. Can these two learn to work together and make a success of it?

Is this one my favorite in the collection?!?! Perhaps.

I enjoyed all three stories or novellas. I did. I don't think it was really necessary to try to force a connection between each story and the actual Charles Dickens. Instead of being cute, charming, quaint...it felt a bit forced.